Battling for life with a smile

To battle an illness is a process which one can describe as being painful, both mentally and physically.

BENGALURU: To battle an illness is a process which one can describe as being painful, both mentally and physically. But for Parimal Gandhi, who has survived four episodes of cancer, almost lost his sight due to corneal dystrophy and also underwent a cardiac bypass, his belief is firmly grounded on the human spirit being able to surpass difficulties, irrespective of the level. Speaking to CE, the Bengaluru-based Human Resource Development (HRD) Trainer talked about his book, Can Surmount, which revolves around his journey of battling against life-threatening ailments, while he simultaneously maintained a successful career in HRD by training over 11,0000 participants and 1,500 trainers globally for Fortune 500 companies. 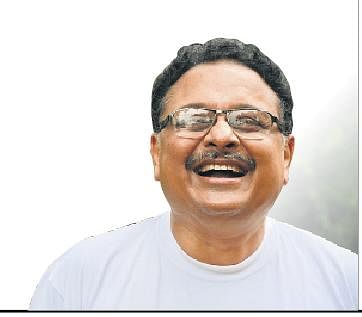 Reflecting on his journey with book, Gandhi’s bout with medical aliments started rather early in 1974 at the age of 21, when he was diagnosed with bilateral corneal dystrophy, a rare, irreversible and slow-moving disease in which the corneas waste away. After a failed corneal transplant in the first attempt, while he was making arrangements for his next round of treatment in the US, Parimal was diagnosed with Hodgkin’s disease in 1984.

Within a span of one year, Parimal went through another corneal transplant, intense chemotherapy and radiation.  In spite of chemotherapy and radiation, the disease recurred in 1994, 2004 and 2014. Ask him on what helped to look past these difficulties, he quite promptly credits it to education. “There were two institutions, one was my school in Ahmedabad where I grew up and the second was my mother. She has her own share of ailments which she would battle with a smile on her face. She is my role model,” he adds.Talking about his bouts with cancer, Gandhi states that while mentally it’s always a challenge, he chooses to deal with problems in a positive manner with an added faith in god, “God knocks me down but never knocks me out.

An example I would give you is when I moved to a new apartment in Bengaluru last year and my neighbour was cancer surgeon and second instance was when I got on a train and I met an eye doctor who claimed he rarely gets on a train, these are very intentional placements, I don’t believe in miracles but rather depend on them.” says Gandhi While his fight with ailments was grounded to a positive mindset, balancing his career involved a similar pattern. Gandhi emphasised that he would schedule his medical appointments in accordance with his training.

“During my first and second instances of cancer, I didn’t lose hair, so I didn’t inform the clients about my condition. Only my coordinator would be informed in case I collapsed. When I did lose my hair midway through a series of training programs, I shaved my head and informed the clients about my condition. I continued my training and told them that this was just to keep them informed, they were really surprised.” exclaims Gandhi