For the love of heavy metal

When it comes to keeping metal alive in India, Bangalore Open Air (BOA) has been at the forefront since its initiation in 2012.

BENGALURU: When it comes to keeping metal alive in India, Bangalore Open Air (BOA) has been at the forefront since its initiation in 2012. The prominent festival returns with its eighth edition this month and stays true to its title of being the only dedicated festival for the metal genre in the country. This year’s edition will witness hoard of international artists with the likes of Swedish black metal outfit Marduk,  Finnish death metallers Kalmah, German symphonic metal outfit Beyond the Black, Los Angeles based progressive metallers Intronaut and Kannur-based thrash metal outfit The Down Troddence. 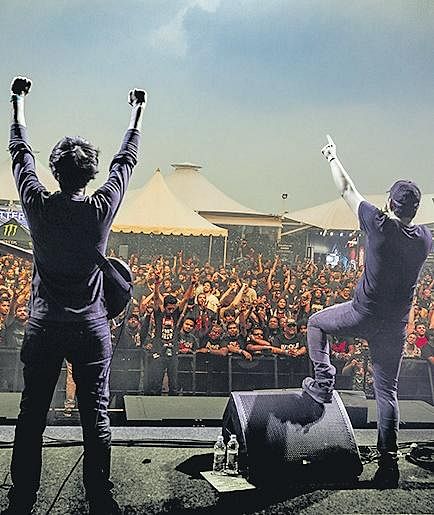 Speaking about the upcoming edition, Salman Syed, Founder, BOA states that apart from raising funds, the biggest challenge was the misconception surrounding the genre. “Today, many people don’t want to associate themselves with metal due to the great misconception about the audience not being right and antisocial elements. At the end of day, there are regular people who listen to metal. It’s new faces every time we do the festival which amounts close to 60 per cent of the crowd. This year, we have the German Embassy partnering with us along with Beyond the Black.

We also have the metal-battle, where we give an opportunity for one band from Bangladesh, Sri Lanka, Nepal and India to represent the Wacken Festival in Germany,” he says. Martin Rohlmann, Cultural Officer of German Consulate emphasised on the festival as an out-of-the-box approach to connect with the younger crowds and also pointed out the prominent metal talents within the country. He further added, “The event will also witness the presence of the Walter Lintner,German Ambassador to India who is also a multi-instrumentalist and has performed with Ricky Kej [Grammy-award winning musician] in the country. This would be exciting to see all the talents gathered at one event.”

The festival has showcased widely-acclaimed international and Indian acts since its initiation making a strong stride towards keeping metal well and alive in the country. Munz who handles vocal duties for The Down Troddence stressed the festival is crucial to bands in the metal genre, he further added, “We are glad to be playing at BOA again because its always been a different experience from our usual schedule. We have been on and off stage over the last three years since we are working on our album and to have a comeback is a big deal. The festival has always believed in core values and brought underground and metal music to the current scene. It’s rare to see metal festivals happening in cities and it is possibly the last hope we have in the metal scene.”