Boats out to rescue citizens in city

BENGALURU:  It was a wet and dreary start to the festive weekend. For the second time in a week, heavy showers through Friday evening left Bengalureans stranded by roadsides, in vehicles, homes and offices, with nowhere to run for shelter. Rivers of rainwater gushed through the roads, rising above knee-level, entering homes and flooding basements and markets. Vehicles were spotted floating in filthy water.

NDRF boats slid out into the water on rescue missions, as complaints poured down the BBMP hotline, and teams were requisitioned. A team of 20 personnel with boats were sent to Hosakerehalli, Dattatreya Layout and Gurudutt Layout to rescue people.Traffic came to a standstill in most parts of the city, causing hardship to a number of people heading out of the city for the festival. This is not all: India Meteorological Department and Karnataka State Natural Disaster Monitoring Centre officials have forecast more rain across the city and state for the next three days.

Water also gushed into homes in low-lying areas of Bommanahalli, into apartment complexes in Sapthagiri Layout in Uttarahalli, besides the basement of several apartment complexes along the drain in Hosakerehallli. Locals reported that there was no difference between water flowing in the drain and on the road, but for the retaining wall. Mysuru Road appeared to be the worst hit as the water level rose, leaving vehicles and buses stranded. Commuters below the flyover and Metro line were surrounded by 2-3 feet of flowing water. The roads around Gandhi Bazaar, near the flyover, and Chickpet were also blocked by more than two feet of stagnant water. 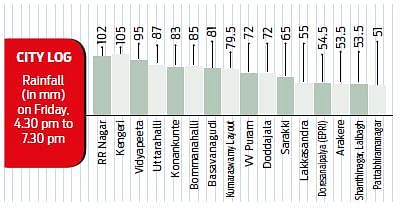 The compound wall of Gavigangadharaswamy temple, near Harihara Gudda park, collapsed due to heavy rainfall.BBMP engineers rush to the spot to drain out water, using tankers and pipes, layouts and roads, to make them motorable. BBMP Commissioner N Manjunatha Prasad visited the affected areas to take stock of the ground situation, then reached the control rooms and attended to calls from aggrieved citizens. He directed officials to be on vigil round the clock and attend to complaints.

MET PREDICTS
IMD officials say that the Southwest Monsoon is active over coastal and south interior Karnataka, and weak over north interior Karnataka. The depression over northwest Bay of Bengal, off Odisha coast, has moved towards Bangladesh coast, and is likely to move towards West Bengal and adjoining Bangladesh coasts. The East-West trough along peninsular India persists and is now between 1.5 km and 3.6 km above mean sea level. Officials point out that under the influence of these systems, the city and most parts of Karnataka will experience heavy to very heavy rainfall for the next three days.

Now we are on Telegram too. Follow us for updates
TAGS
Bengalureans