BENGALURU:As the indefinite strike by employees of the four state-run transport corporations entered the second day on Thursday, many drivers and conductors reported to work, though the employees’ unions maintained that the strike will continue. While some staffers claimed that they were forced to return, others said they could not make citizens suffer and rejoined duties.

According to an official release, 446 buses belonging to the four corporations resumed operations on Day 2. Around 4,412 private buses ferried passengers for Karnataka State Road Transport Corporation (KSRTC), 2,188 for North Western KRTC and 4,278 for North Eastern KRTC.

Also, 524 buses from Tamil Nadu, 299 from Andhra Pradesh, 25 from Telangana and 30 from Kerala transport corporations operated from Bengaluru to ferry passengers to various destinations in the state.
While the unions remained adamant on their stand, Transport Department officials tried to convince those on strike that it was citizens who were being inconvenienced. The unions also held a meeting and said the strike will continue indefinitely.

Principal Secretary to the Transport Department, Anjum Pervez, told media persons that there are around 26,000 buses which ply in the state in all four corporations, including the Bangalore Metropolitan Transport Corporation (BMTC). To substitute for this, 18,000 private vehicles have been arranged and the permits of all those who had surrendered them have been renewed so that they can ply on the roads. Private and maxi-cabs continued to ferry people, but did not see the desired numbers even on the second day. Also, despite the the warning from Chief Minister B S Yediyurappa and the Transport Department, they were seen charging excess fare. 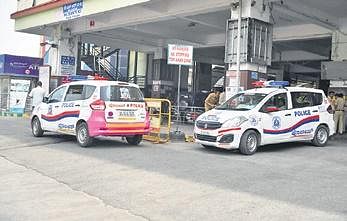 Pervez added that talks with private operators was held to ensure that commuters do not face problems. He pointed that due to the strike, in last two days, the corporations have suffered losses to the tune of Rs 20 crore. After holding a meeting with officials from BMTC, KSRTC, NEKRTC and NWKRTC, Pervez told the unions: “The government had agreed to most of the demands of the employees. However, we cannot revise pay based on the 6th Pay Commission recommendations. But, once in four years, during revision of wages, we will give good salary hikes and other facilities.”

Meanwhile, the KSRTC suspended 32 trainees while the BMTC suspended 96 employees for participating in the strike.A Transport Department official said, “More trainees will be terminated if they do not return to work. If this is how trainees are behaving, then it is better they do not work. In the case of others, notices will be slapped on them in the coming days. Going by the way they are gradually returning, it seems like the strike will end in a couple of days.”

Officials said six buses were damaged, and in one case, petrol was thrown on a driver in Kolar. But the striking employees have termed the allegations as baseless. “Why will we damage the buses we drive? We have not even come on to the roads. We will not damage buses which earn us a living,” they claimed.
Apart from this, as part of Ugadi special, the South Western Railways also announced running of more trains for the benefit of passengers. Namma Metro continues to see and increase in footfall as buses were off roads. Some others also continued to use their personal transport to reach their destinations.

Now we are on Telegram too. Follow us for updates
TAGS
KSRTC Strike