Even as positivity rate sees a rise, mortality rate has fallen

BENGALURU: Karnataka on Sunday recorded a massive jump of 10,250 Covid-19 positive cases in a single day, making it evident that the second wave is truly sweeping the state. While Karnataka recorded additions of 7,955 on Friday and 6,955 on Saturday, Sunday’s addition raised the positivity rate to 4.69 per cent, from 4.67 per cent the previous day. 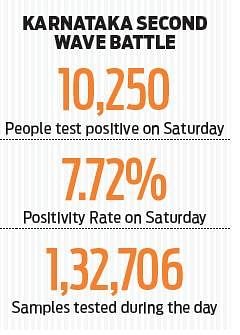 This spike has pushed up the state’s single-day positivity rate to 7.72 per cent, even as 40 deaths were added to the toll, according to the health department’s bulletin. Among the deaths, 27 were from Bengaluru Urban, three from Belagavi and three from Mysuru. The toll in Karnataka on Sunday stands at 12,889, up from 12,849 on Saturday.

The bright side is that mortality rate has fallen to 1.20 per cent on Sunday, from 1.21 per cent on Saturday, and that of Bengaluru Urban has gone down to 0.99 per cent from 1 per cent the previous day - the goal of the health department was to keep it below the 1 per cent mark. Karnataka’s active cases have been shooting up, and stand at 69,225, up from 61,653 on Saturday a growth of 12.28 per cent.

Now we are on Telegram too. Follow us for updates
TAGS
Karnataka BENGALURU