COVID positivity rate shoots up to 12 per cent in Bengaluru

The figure at 12 per cent in Bengaluru indicates that the testing capacity of the city is moving towards its capacity and more number of symptomatic people are getting tested.

BENGALURU: With the number of Covid cases increasing in the state, and Bengaluru being the biggest contributor among districts, the city’s positivity rate has increased to 12 per cent in April. 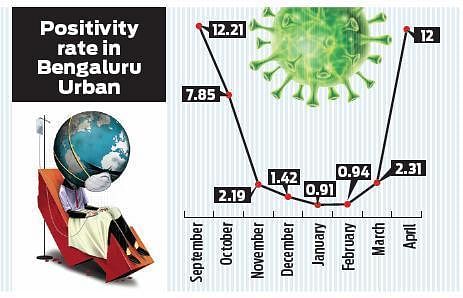 Experts, however, said that the Test Positivity Rate (TPR) is not an indicator of the virus spread in a particular area, but only shows the testing capacity of that city or state.

The figure at 12 per cent in Bengaluru indicates that the testing capacity of the city is moving towards its capacity and more number of symptomatic people are getting tested.

Last year, a large number of testing was government initiated to trace the primary and secondary contacts, and a significantly large portion of testing, until September/October, was Rapid Antigen.

These factors led to a sharp drop in TPR. But in the second wave, majority of testing is by symptomatic people and almost all tests are RTPCR. This should lead to a gradual decline of TPR, experts said.

C Nagaraj, Director, RGICD, and a member of Covid state-level expert committee, said, “With the increase in tests, the positivity rate too goes up. The idea is to track and trace people at early stages of contamination. Since there are multiple variants in the second wave, the virus is spreading faster and more cases are found. People took it casually when cases started to drop. Now with the lockdown in place, the spread will come down.”

Mysore Sanjeev, Convener, Project Jeevan Raksha, said, “The Moving Growth Rate (MGR) is a more effective tool to measure the velocity of virus spread in a region. Higher the MGR, shorter will be the doubling period and vice-versa. For instance, as of last week (April 21), MGR of Bengaluru Urban was 16 per cent, while Chennai had 8 per cent. This means, virus was relatively spreading faster in Bengaluru than in Chennai. During April 14-21, Chennai’s average daily cases were 3,136, while Bengaluru Urban’s were 11,664.”