First-of-its-kind survey was to record all details of individuals, to help govt allocate budget according to needs

BENGALURU: As the Covid pandemic struck post-February last year, the much-touted health registry never took off in Karnataka. While the registry, the first-of-its-kind in the country, was announced for the whole state, Health Minister Dr K Sudhakar had said in May last year that the pilot would be held in his constituency Chikkaballapur with a door-to-door survey.

The survey was expected to record all details of the people — name, age, gender, height, weight, illnesses, health issues, nutrition intake, socio-economic conditions, etc. But after health workers were pressed into Covid care with the cases spiking from June, the survey and registry never took off.  “The registry is vital for evidence-based policy-making in public healthcare. It is to be a comprehensive repository of health details of all citizens in the state. It is a big exercise which requires huge manpower. 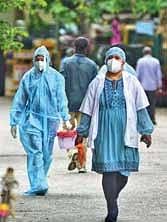 After fighting the pandemic, now we are busy with the vaccination drive and intensified Mission Indradhanush 3.0 which require a lot of manpower as well,” Health and Medical Education Minister Dr K Sudhakar said.“The health registry exercise has been delayed, unfortunately. It is an ambitious project which is close to my heart and is also in line with PM Modi’s vision of National Digital Health Mission. Once the staff are relieved from Covid and vaccination duties, the registry work will be resumed,” he added.

But the exact date for its resumption is not known. After the pilot, the survey was meant to cover over 6.5 crore people in Karnataka. Dr Sudhakar, who was the then Medical Education Minister, had said that such registries have been compiled at very few places in the world and it would help the government draw up health programmes and allocate the budget according to the needs of the people. District officials from Chikkaballapur said parameters for the survey were sent to the minister, but there were no instructions to start the project. A health official from the district also said that with the health workers occupied in hospitals with Covid-related work, it is not possible to conduct the survey now.

Dr Nanda Kumar, associate professor, community medicine, Ramaiah Medical College, said that the registry would give active data on existing comorbidities among the population which is not available currently. It will help tailor targeted programmes for the population. “From a public health perspective, in Europe, such data is called personal health records (PHR), much like how hospitals in India have electronic medical records (EMR),” he said.The survey cannot be a one-time activity as both population numbers and diseases are dynamic, he added.

Now we are on Telegram too. Follow us for updates
TAGS
COVID 19 health registry