The BMC sealed the Oxford College of Engineering and Management at Palaspalli for an indefinite period for violation.

BHUBANESWAR: Continuing its crackdown against violators, the Bhubaneswar Municipal Corporation sealed a technical institute and two convention halls, even as the Capital city remained the worst Covid-affected urban area in the State with daily infection count remaining over 100 for the second consecutive day.

The BMC sealed the Oxford College of Engineering and Management at Palaspalli for an indefinite period for violation. The convention halls of Hotel Presidency at Nayapalli and Ram Mandir on Janpath road were also sealed by the civic body for violation of safety norms. Enforcement squad members of the South-East zone of the city said the Ram Mandir temple management had allowed a birthday function to be organised without seeking BMC permission. They also imposed Rs 5,000 fine on the organiser for breaching the BMC order. 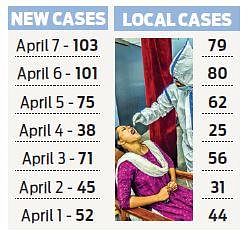 With the BMC setting a target of covering over 7,000 beneficiaries a day, the load on the session sites to inoculate more number of people has also increased. An official at a session site in Saheed Nagar said though they are being supplied with adequate doses of vaccine, there is only one vaccinator. Other session sites at Urban CHCs and PHCs are also facing the same problem.

“While government guidelines mandate a vaccinator to vaccinate 100 beneficiaries a day, here the vaccinator is inoculating more than 200 beneficiaries,” said the health official at the Saheed Nagar Urban PHC session site.