Party MLA Santosh Singh Saluja said the White Paper is usually circulated a day ahead of the demand discussion relating to the Home department in the House.

BHUBANESWAR :  The Congress  on Saturday moved a breach of privilege notice against Minister of State for Home Dibya Shankar Mishra for the alleged delay in tabling the White Paper on crime situation in the Assembly. 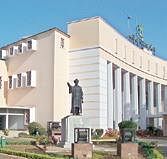 Party MLA Santosh Singh Saluja said the White Paper is usually circulated a day ahead of the demand discussion relating to the Home department in the House. However, this time the White Paper was circulated on the day of the demand discussion on Friday at 11.30 am. Saluja urged Speaker Surjya Narayan Patro to refer the matter to the Privilege Committee of the Assembly.

Alleging that the law and order situation has deteriorated in Odisha, he said the House could not hold the discussion as the government tried to avoid the debate on the issue. However, Parliamentary Affairs Minister Bikram Keshari Arukha rejected the allegation and said the discussion on the Home department’s budgetary demand was shifted from March 22 to March 26 as Chief Minister Naveen Patnaik was busy during the recent visit of President Ram Nath Kovind to the State.

No business could be transacted in the Assembly on Saturday as BJP members created ruckus over alleged mismanagement in the procurement of paddy in the State. Noisy scenes were seen when BJP MLAs rushed to the well of the House seeking a statement from the government on the issue. They also demanded extension of the deadline for procurement from March 31 to April 15.

Raising the issue, Leader of Opposition Pradipta Kumar Naik urged the Speaker to give a direction to Food Supplies and Cooperation Minister Ranendra Pratap Swain to make a statement on the status of paddy procurement.

Now we are on Telegram too. Follow us for updates
TAGS
Dibya Shankar Mishra