The Boy Who Chases Butterflies to Beat Exam Stress

Most 16-year-old boys take a study break with some TV or video games. Vikas  Madhav, on the other hand, turns to butterflies. The Class 11 student says, “It’s a stressbuster for me. The bright colours, the kick of finding a new species I’ve never seen before...it’s very relaxing.”

After recording 121 species on his Panasonic FZ 1000 such as the Common Albatross and the rare Blue Mormon, Vikas plans to compile a list of ‘Butterflies to Spot in Chennai’ that can be released for enthusiasts, hopefully by the end of the year. “It may take longer; I wouldn’t want to leave any species out,” he explains. “I’m particularly excited about this because in my two years of research, I have not come across any records in the city with more than 80 species.” 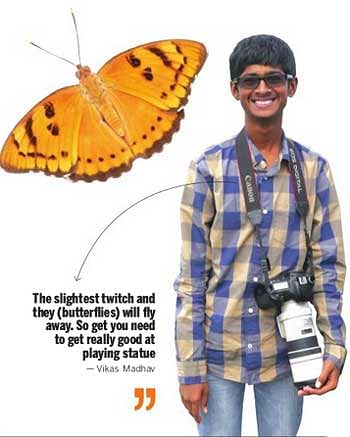 By research, he means an ever-growing collection of butterfly books, the vast reserves of the Internet and history books dating back to as far as 400 years ago, with brief sections on the butterfly population in the city.  The irony is that none of this would have happened if not for a hectic series of cycle tests in July two years ago.

The month was a happy coincidence, as Vikas later found that July is one of the months that butterflies migrate, arriving in large numbers to gardens and campuses.

He recalls, “There were hordes of them near my house in Indira Nagar; that sparked my interest. I like to think they use the area where I live as a stopover section before they head to IIT or MCC for larger green spaces.”

His favourite spaces to chase his passion are the Guindy National Park and the Madras Crocodile Bank Trust. “One of my favourite sightings of the Southern Birdwing (India’s largest butterfly) was at the Croc bank,” he recalls.

Already a popular face in birdwatching circles, it didn’t take him long to find a group of like-minded folks and form a Whatsapp group to share information on rare sightings. With amateurs like college students and 40-year-old wildlife enthusiasts part of the network, he’s still the youngest of the lot, much like when he started his bird-spotting adventures about a decade ago.

So how different is birdwatching and butterfly watching? “I guess, there’s only one,” he grins. “For bird watching you look up, for butterflies you look down! Although, he adds after a serious moment of thought. “The slightest twitch and they’ll fly away, so get really good at playing statue.”