From flood-ravaged slum, families pushed to ghetto on Chennai's edge with no water, power or schools

Packed together in TNSCB’s Perumbakkam facility, the residents list out their woes ranging from lack of water, power supply to safety.

CHENNAI: The luggage arrived as quietly as its owners. The shifting of families ­– from the banks of the Cooum at Aminjikarai to the rehabilitation settlements of the Tamil Nadu Slum Clearance Board (TNSCB) at Perumbakkam ­– was marked by an air of resignedness.

Asked whether she will shift to another school nearby, Revathi R, a Standard XII student in a private school at Aminjikarai, shrugged. “We have not decided what to do yet,” she said.

Her parents were at a loss. Both of them had reared cows all their lives back at Aminjikarai and now they have to sell them off in a hurry and start all over again.

Many residents of Aminjikarai were not against the shifting, but they just did not want it to be Perumbakkam. Santhi R, who used to work as a domestic help, said they wanted to move to Ambattur, if at all they had to. And all they got was Perumbakkam.

In fact, confident that this day would never come though she had received allotment sometime last year, Santhi had pledged her daughter’s necklace to build a new roof for her house in Aminjikarai only a few days ago.
“I have lived there since I was 10. Now it is all gone,” said the 52-year-old. 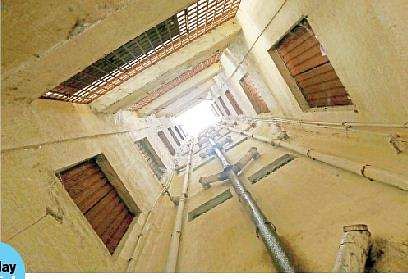 Most of their belongings ­– wodden boxes, foldable cots, old shopping bags among others – had to be taken by the elevator because the staircases were too narrow that even two medium-built persons cannot walk side-by-side. Though there were two elevators in every block, one was non-functional in most of the blocks.

Chandra S, who got her new home in ‘L’ block, arrived at Perumbakkam on Wednesday. She has not had a bath ever since!

“There has been no water supply for the past three days. For drinking water, we buy cans priced at `25 each,” she said.

“We have been sleeping without a fan. No action has been taken on our complaints so far,” says Lakshmi S, who had to use her neighbour’s toilet because her toilet drain was filled with cement.
She had cataract surgery on both eyes recently at the Kilpauk Medical College Hospital, Now, the hospital is 24 km away.

When contacted, the TNSCB officials said the issues related to power and water supply would be immediately looked into and all inconveniences sorted out at the earliest.
Residents agreed that the officials had helped them move without a hitch and had even thoughtfully provided them sambar rice for lunch.

But Banu had a lot more running on her mind than sambar rice. She lived with her mother and uncle, both blind.

“My mother sells ration card covers in the Tambaram Railway Station. This place is entirely new to her. So she would need my assistance until she gets familiar with this place and the bus route,” she said.
The children in the area make the most of the place even though their school is a housing tenement that has been turned into classrooms ­– drab and dark like the others.

According to Vanessa Peter, an activist and policy researcher who has been extensively involved in rehabilitation issues, the children were to be shifted to the new school building. But it has already been nine months since they moved in.

The flaws
Though the residents have taken most of the issues in their stride, considering it as a price to be paid for not having to live in fear of waking up to floods or fire, Perumbakkam hides a few darker stories. The flawed building design had resulted in the fall of two girls. While one of them died, the other received severe leg injuries.

A small plate of rice and a glass of water on the seventh floor marks the spot from where 15 year-old Nathiya fell to her death. Her mother Jaya leaves it in the open-to-sky (OTS) area on their floor for her every day, knowing fully well she won’t be coming home for lunch.

On October 27, Nathiya came home from her school located near Nandanam around 8.30 pm, the usual time she reached home after travelling almost 25 km in the evening traffic. She went outside to pick up her clothes that were put for drying there, but tripped and fell seven floors down.
“I was sitting right here in the hall and all I could do was to watch her fall,” said Jaya, who works as a housekeeper in an apartment not far away.

The OTS space model in the building blocks at Perumbakkam was introduced after the board came under severe criticism for the almost absolute lack of skylight in their earlier tenements. These spaces were introduced to bring in skylight from the highest floor right down to the first floor.

Not only do they not light up the narrow corridors of the first three floors, they present dangers for children as in the case of Nathiya. A month after her death, the space still remains unprotected and clothes are still dried there by the ‘H’ residents where Nathiya lived.

Before her, 12-year-old Sruthi (name changed) had fallen from the sixth floor of the ‘AE’ block where the OTS model is different from the one in ‘H’ block. Here, there are grilled spaces on the walls opposite to the entrances of the houses on the floor, which are intended to cover the OTS space in the corridor wall. This parapet wall overlooks another wall with toilet plumbing running over it while allowing sunlight into the floor.

“We don’t think it brings any light, but it certainly brings in stench from the leaky toilet plumbing from the opposite side of the wall,” said Loganathan T, who operates the lift in the block and also lives there.
More importantly, the grills have a door that can be easily opened and remains so in most of the houses most of the times.

Selvaraj remembers the date – May 10 – well as it was his birthday. It was summer vacation and Sruthi, a resident of Ice House, had come to visit his uncle Manigandan who lived next door to Selvaraj. “I invited her and five or six other children in the neighbourhood for lunch as it was my birthday,” said Selvaraj.

As they were waiting for the lunch, the kids went out to play. That was when Sruthi caught the clothesline over the OTS grill and jumped onto the parapet wall, causing her weight to push the grill open, leaving her to plummet six floors, said neighbours.

But, it was on Saturday, that Sruthi took her first steps after the fall. “She has not been able to go to school. Though her school is very understanding when it comes to the fees, she will have to study in Class VI again next year,” said her mother, who sells plastic items from door-to-door with her husband.

But Sruthi, determined to go to school as soon as possible, has followed her physiotherapy regimen strictly. “It hurts a little when I walk now, but I am sure it will get better as I start walking more often,” she said. When contacted, a senior TNSCB official said the doors on the grills were to carry out plumbing and maintenance activities in the pipes that ran across the walls opposite to the grills.

“But now, we have planned to provide locks to the doors and hand over the keys to the maintenance workers. We will take every precautionary measure possible,” he added. But activists said it took much more than a temporary fix.

“Imagine the kind of steps that would have been taken if it had been a housing society for other income groups,” she added.

According to Vanessa, as early as 2011, the Tamil Nadu government had recognised the need for rehabilitation and resettlement and housing policies. But till date, no such policy has been evolved.
“There has been denial of rights, especially as there is no access to social infrastructure facility,” she said.