On the floors of Thyagaraja Swamy temple, Tiruvottiyur, you will find several carvings of traditional games
Take a walk through the temple on Sunday along with history buffs to know more

CHENNAI: Temples of yore in Tamil Nadu served as public welfare institutions and spaces where culture and secularism thrived. But today these structures are painted with coats of religion that overpower its powerful accounts of people, their socio-economic status and political records. With many of these living museums of the past still standing tall through the test of time,  two history buffs in Chennai — Pradeep Chakravarthy and Vinita Sidhartha of Kreeda — decided to curate a walk along the Thyagaraja Swamy temple also called Vadivudai Amman temple, Tiruvottiyur, as part of the Madras week celebrations.
Talking about the walk which will throw light on the inscriptions, games and history of the temple, Pradeep shares, “What we have noticed over the years is that not many events take place during the Madras Week in north Chennai. So, when we looked at what to do in terms of heritage tours/walks, we picked the temple in Tiruvottiyur first,” shares the historian-cum-behaviourist.

The temple, which once was a centre for learning, and also a venue for discourses in philosophy, religion and grammar, today is known for housing the most number of temple inscriptions in Chennai. “Some inscriptions even date back to the time of the Pallavas and Cholas. The temple had a strong role in the local economy. There are inscriptions that talk about the Chola military strategy, and also how the temple supported local traders and provided educational facilities,” he shares.

But apart from what many consider as ‘traditional inscriptions’ or writings, there are games that have been etched and inscribed on the floors of the temple over centuries. “When people visit this temple or any ancient temple for that matter, they don’t realise how many inscriptions and games they walk over on a daily basis. For example, in this temple, one can find the board of Aadu Puli Attam, etched on the floor. But, what’s more fascinating is that there are five to six boards of the same game, in three different versions!” shares Vinita. So, where were Aadu Puli Attam board game competitions conducted? Did different groups battle against each other? The questions are aplenty.

“The games were built and inscribed using geometrical figures and is definitely not the work of someone who ‘casually’ scratched it on the floor. Let’s remember that these are granite floors and would have required a lot of effort for someone to ‘scratch it’!” exclaims Vinita.

Such nitty-gritties add up to the question of what the actual age of certain traditional games we still play, might be. “We can only guess the age and origin of these games. There are a couple of inscriptions of board games in the temple that have its roots in Andhra Pradesh and don’t even have a Tamil equivalent name for it. One example of such a game is ‘Dahdi’. This game is played similarly across ancient Egypt, Germany and many parts of south India.”

From housing riches to being an institution that brought communities together, the temple echoed the changes in the society over the years. “While several inscriptions were lost over the years, the temple authorities are trying their best to preserve what’s left of the temple. Several factors add to the loss, but it’s everyone’s responsibility to try and document what’s available,” shares Pradeep.
But, Vinita says that they are overwhelmed by people who have taken an interest in bringing a positive change. “There are people who have come forward passionately to learn more about the temple and that’s a start. Creating awareness is the key,” she adds. 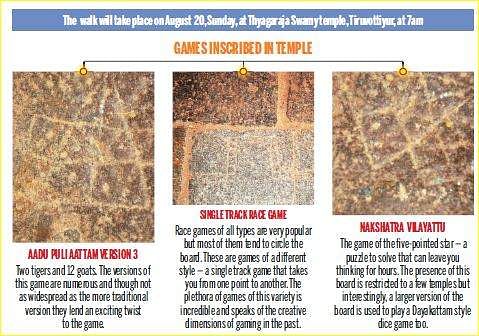