Timeless bylanes of Mylapore and Royapettah come alive in a project headed by a team of young architects .

Timeless bylanes of Mylapore and Royapettah come alive in a project headed by a team of young architects. Funded by Ashvita Foundation,  the Vanishing Heritage Project aims to document the old structures of the city.

CHENNAI: When we think of Mylapore, Triplicane or Royapettah we think of narrow streets lined with agraharam homes, with their clay-tile roofs and wooden rafters, the faint cultural aroma of kumkum in the air. Can you imagine the same Mylapore with boxed concrete structures? Each place has its own past, and its architecture is a vital tangible identity that retains stories of yore. But these significant markers of history are slowly being razed due to negligence, abandonment and sheer ignorance.

To document this fading heritage, Ashvita Foundation initiated the Vanishing Heritage project. As a pioneer project, it selected two teams to visually document and map the heritage structures in the two historically important areas in the city — Mylapore and Royapettah. The project work began in January, and an overview of their documentation and findings will be showcased through a presentation today.
“The focus on architecture is because it is one of the lasting artefacts of tangible heritage. There is a great deal of the urgency...it is mind boggling how rapidly the profiles of these areas are changing — which is why this became the focus,” explains Swati, Ashvita Foundation. 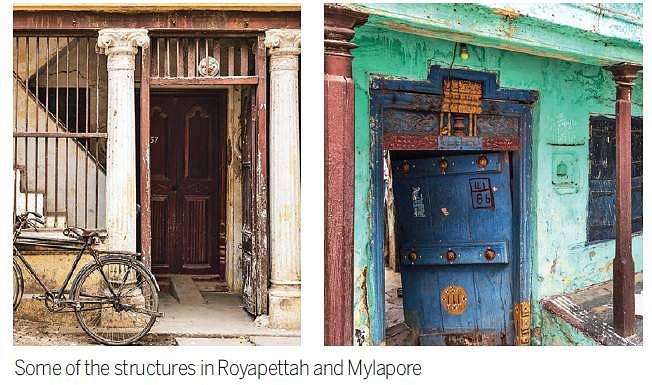 Armed with a camera and notepads, Sivaranjani Sankar and Shamila Kareem, both young graduates of architecture, walked the streets of Mylapore, dividing the area of Mylapore into four sectors for ease of mapping. “Some of these structures are in the process of demolition now; we were lucky to have found at least a few houses to document,” Sivaranjani says.

Shamila says though there are many heritage structures in Mylapore, many are abandoned, or the ground floors are adapted to a shop, and some are sold and made into flats, as maintenance is costly.
Despite the reduced number of houses, they found several interesting structures, such as the residence of the well-known Carnatic singer, Musiri Subramania Iyer. there is a road named after him. “His kin still continue to perform in the same residence even today,” Sivaranjini quips.

For Royapettah, the team has Tahaer Zoyab, Uttara Chockalingam and Pooja Chordia. They started their work by walking through the areas to get a feel of the neighbourhood and also to make mental maps. “We broke it down into different areas: congested areas, areas with bungalows, and commercial areas. We then started marking out the houses onto maps, along with the architecture style and other details. Now the map is pretty extensive!” explains Uttara.

Stories within stories were easy to find, the team says. “We noticed one building had a sun motif on the top, and as we walked around, we saw that the same motif was on three more buildings. They were built it in the 1920s and 30s, which we saw from the load bearing thick walls which is why the building is still standing and in use. We were told that the house belonged to Mayor Kamalakannan, and all the houses of his relatives have the same motif on it,” she explains.

The residents had mixed reactions to the sudden interest in their areas — from critical and curious to welcoming,  feedbacks were interesting. “One man invited us in, and told us his house was built over 90 years ago, and still retains the original tiles and stained glass. He told us about maintenance, and how it is economically sensible to raze it, build a flat and rent it,” rues Uttara.

Emphasizing on the importance of such documentation, Uttara recalls an incident during their initial stages. “We had taken pictures of three houses to come back and mark on the map, and when we went back three weeks later, they had been torn down. We didn’t recognise the area because they weren’t there. That’s how quickly things are changing!” she points out, commenting that the new structures coming up don’t have an identity to the area. “This has so much history to it. Now I guess, every area in Chennai will just look similar,” she laments.

After the annexation of the House of Carnatic, the relegated Nawab of Arcot was removed from his royal seat in Triplicane, to what would become his quarters in Royapettah. The Amir Mahal, designed for this purpose by Chisholm, was originally a police building, altered and remodelled after Queen Victoria’s Italienate Villa, the Osborne House. It is perhaps this final and lingering bastion of royalty that lent Royapettah its name (Rayar — ruler; pettai — place or colony, meaning the home of the Royals).
The settlement of Mylapore pre-dates the establishment of the British settlement of Fort St George. Mylapore served as an important port and centre of maritime trade for the Pallavas of Kanchi in the 5th to 6th centuries!
(Source: Ashvita Foundation)

The Vanishing Heritage Project
presentation will be held today at Ashvita Bistro at 6 pm. For details, call 42109990