CHENNAI: Rapid and unscientific industralisation in and around the ecologically-sensitive Ennore Creek seems to be pushing thousands of lives into a death trap. According to the latest study, the Kosasthalai river water is more contaminated than effluents let out by industries!

The study was conducted by a three-member expert committee constituted by the National Green Tribunal (NGT). A total of 20 water samples were taken - five from Kosasthalai river, five from backwaters, three from the river near Seppakkam, two of water from the Daikin area, two from borewell, two Metrowater samples and one from a secondary pond. All samples from Kosasthalaiyar, the backwaters and the secondary pond contained elevated levels of several toxic metals. 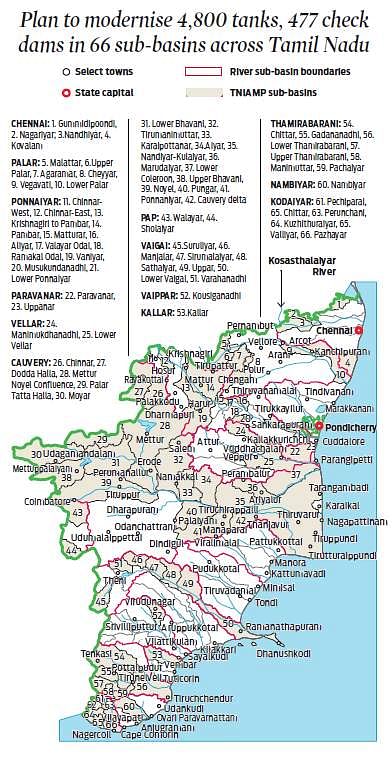 The report says Kosasthalai river samples were more contaminated than even legally permitted treated effluent quality. All five samples taken from the river had lead, mercury and arsenic in excess of standards for discharge of environmental pollutants into inland water bodies. Two out of five samples had above-standard levels of zinc and one out of five had manganese in excess of standard for discharge into water bodies. Same is the case with backwater samples.

The borewell samples taken from Seppakkam, the village west of the ash pond, were severely contaminated with copper, manganese, cadmium, mercury, lead, chromium and nickel. These metals were found at levels in excess of Indian drinking water standards.

“The presence of these metals indicates that toxic contamination has already happened due to seepage from the fly ash pond. The land to the east, northeast and southeast of Seppakkam village is visibly contaminated with fly ash and seawater. To the south, the area is permanently water-logged as rainwater is blocked by the bund of the fly ash pond. Even fish and home-grown vegetables contain high percentage of heavy metals,” the report said.

The committee, before recommending for a separate health study, said the chemicals found in the water and fish are known to exert a variety of health effects on virtually every system of the human body, including reproductive and central and peripheral nervous systems.

Some of the metals are carcinogens and some affect the brain, kidneys and can even harm developing fetuses. “Fish consumers are at risk due to the high levels of toxic contaminants found in fish, crab, prawn and mussels.

“Residents of Seppakkam are particularly at risk due to high levels of airborne dust and contact with contaminated water and groundwater. Residents at far away places such as Vallur, Minjur, Nandiambakkam and Athipattu reported increased dust pollution in their residential areas. Besides toxic heavy metals, fly ash is also rich in silica, which can cause a lethal disease called Silicosis — often mis-diagnosed as tuberculosis,” the report says.

The committee report said the flood plains, bed of Kosasthalai river and Buckingham Canal have considerably aggraded due to fly ash deposits by as much as 1.0 or higher. This has had considerable influence on the ecological function of the sensitive marshland ecosystem. Further, the flood carrying capacity of the river and canal has been considerably reduced, resulting in poor disposal rate of flood waters and eventually resulting in increased inundation in upstream areas. The whole of North Chennai can be affected.

The committee has also recommended a separate survey to quantify the losses suffered by fishers. Local fishermen confirm that several species of fish have either disappeared or are on brink of extinction. White prawns, black prawns, sand prawns, tiger prawn and green crab have disappeared, affecting the fishermen from Sivanpadaikuppam, Kattukuppam and Mugatwarakuppam, who are wholly dependent on the river and creek and do not fish in the sea. Irulars - a scheduled tribe that lives in small hamlets at Sadayakuppam, Kuttupally and in a few clusters in Athipattu Pudunagar, are also traditionally dependent on creek fishing. The villagers of Ennorekuppam, Thazhankuppam and Nettukuppam fish too in the creek when the sea is rough.