Do you feel empty or lonely? Why not try and express yourself through art? CE identifi es the Expressive Art Therapy programme that’s catching up in Chennai

CHENNAI: Expressive Arts Therapy (EAT), a form of therapy that uses singing, drama, visual arts to storytelling for individuals to express themselves, is gathering momentum across the country. Since the therapy is relatively new, Chennai is slowly waking up to it, and the psychology department of Women’s Christian College (WCC) and the East West Centre for Counselling and Training are set to speed up the process through a conference-cum-workshop here on February 16 and 17.

Talking to CE, Magdalene Jeyarathnam, director, East West Center for Counselling and Training, says the conférence is a result of fi ve years of EAT diploma course with WCC. “In our centre, people from all ages and walks of life expérience the process. It’s not about using one particular art form, or a series of forms one after the other, but it’s more about using the forms from one modality to another,” she explains. The EAT diploma course offered by WCC and EWC for counselling and training is the fi rst collegebased training viable in India and was started in 2011. “We wanted the conference to be a holistic experience for both old students, and freshers who would like to learn the nuances of the therapy. 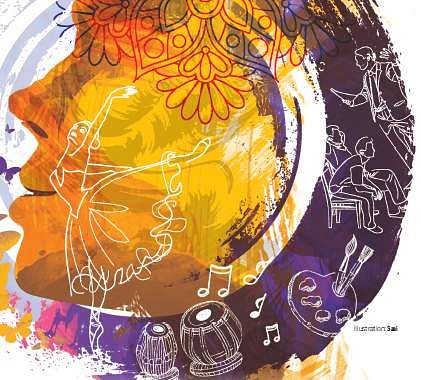 For now, the accessibility of such training is limited to the US, UK and Singapore…in India, this is one-of-akind,” she shares. Veena Easvaradoss, head, psychology department, WCC, opines that the conference will help both students and professionals share their experiences with each other, which in turn will give them with more skills and experiential training. “Since we don’t have many qualifi ed practitioners in India, they have been brought from other parts of the globe,” she adds. Catherine Lenoire, a student, and former manager in engineering for nuclear power in France, says that ‘a feeling of emptiness’ after she moved with her husband to Brazil made her take up arts and eventually brought her to India, later.

“I had my children and other work, but I felt totally lost when I arrived in Brazil, feeling empty. I started to draw and found interest in a new language — art…and without words and cultural boundaries, I could communicate,” she narrates. Once she returned to France, the urge to share her experiences with her neighbours led her to a friend who introduced her to art therapy. “So, when I moved to India, I looked for training in art therapy. Luckily, I met Magdalene at her counselling centre and she explained what EAT was and also about the training in WCC.

It was exactly the space I needed to develop art therapy in areas other than visual art,” she shares. Since then, Catherine has started three groups; and one was for the French to make them feel comfortable in India. “It can help them understand how to be themselves fi rst, without the thinking about experiences with a French or Indian fi lter,” she says. The other two, were for caregivers of children with special needs. “Expressing yourself through art gives you a medium which becomes as a mirror at a right distance.

There is no judgement, only facts and reality. It has been successful to experiment again; it gave me an opportunity to disconnect with cultural prejudices or fears. I have been able to enter into a movement through dance, music, theatre, storytelling and visual art, expressing in many other ways than cultural identity,” she adds. This is one of the many stories of how EAT changed lives, opines Magdalene. Talking about another possible outcome of the conference, she says, “We would also be beginning the fi rst EAT association in India. All those who have passed out will form a professional association, and defi ne who an art therapist is,” she says.

(The Annual International Conference on Expressive Arts Therapy will be held on February 16 and 17 at WCC. For details, visit: www.centerforcounselling.org or call: 42080810)