Crematory grounds and rituals have been famously labelled as places  where women should not be allowed. Meet Esther Shanthi and Praveena Solomon, administrators at the Chennai Corporation Cremator

CHENNAI: Cremation rituals and crematoria have always been labelled as ‘a place NOT for women.’ But since 2013, things have taken a positive turn. As part of a joint venture between Indian Community Welfare Organisation (ICWO), an NGO and the Corporation of Chennai, two social workers Esther Shanthi and Praveena Solomon took up the administrative job at the Otteri and Velankadu Crematoriums respectively, and their lives have changed since. City Express met the two who were recently rewarded scooters at a function by the NGO.

Its 8 am and as the traffic at New Avadi Road begins, one spot opposite the RTO office is calm and quiet. A faded board points us to the Valankadu crematorium, tucked away in a corner of a huge area. As we enter, bright yellow park-deck-chairs, vivid flower pots and piles of wood, invite us shattering the stereotype one has about ‘how a crematorium would look’. 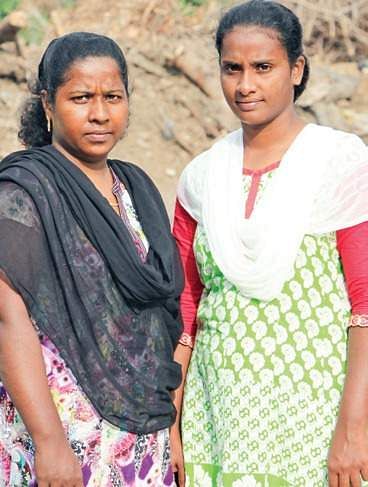 At the portico of the office, we meet Praveena as she sweeps. “We have staff here to sweep, but I don’t mind doing it either. After all this is a place that needs to be kept clean. And not all crematoriums look this way …now it looks like a park!” smiles the 30-something English literature graduate.

But what we see of the crematorium today came after a lot of hard work and perseverance. From poorly maintained toilets to what looked like a make-shift dump yard, the place has been turned upside down. “When I was asked to take up the job, I was hesitant. It was Esther who stepped in for the job first and then, I joined. We were initially scared — of the men here and the unpredictable nature of the job, but later overcame it,” she says.

Though it has been three years, Praveena still recalls the horrific experiences Ether and Praveena had to go through with the ‘brokers’ during the first six months. “First, they couldn’t accept that women were doing the job and secondly, their income was affected – the crematorium does everything for free and this didn’t go well with them. In the beginning, I used to jump at even the slightest sound…not fear from ghosts, but of these men,” she shudders.

From threats of throwing acid to passing vulgar remarks on these women, the duo has faced it all. Praveena inspired a 25-year-old Divya Raju to work at the ground. “I used to see akka come for work here and took it up. I don’t see why more women don’t come forward,” she says.

Esther was transferred to the Otteri crematorium to take care of its administration and says she’s facing a ‘season 2’ of the same challenges. When we met her at the crematorium on Brick Kiln Rd, the premises were deserted.

Eerily silent, the smell of dried rose petals and the mild stench of smoke from the previous day’s cremations shrouded us as we walked inside the venue – a strikingly different scene from Velankadu. As we waited for her to arrive, we couldn’t help but notice the ‘area men’ or ‘brokers’ who casually walked inside the crematorium. But, as Esther arrived, the scenario changed and they chose to leave.

“They are the traditional Vettiyans who have been doing this job for generations. Most see me as a threat to their jobs — we do the cremations free of cost here and it eats into their income. I have seen a lot of unpleasantness, but I am not going to budge, no matter what!” says Esther who has been associated with ICWO for 15 years now.

Unlike Praveena whose family has been supportive of her career decision, Esther, commerce graduate got almost no support from her family. “They don’t see this as a respectable job. But, I know what I am doing. Maintaining two crematoriums has taught me a lot and I feel blessed to do this duty for people,” she beams.

Recalling the several anti-social activities that took place at the premises when she began working here, including that of drunk hooligans sleeping on the gravestones in the morning, she says, “It wasn’t easy…it still isn’t. But I know I can bring a change slowly.

There are several brokers, who after seeing the work I do here as a woman — from cleaning to taking care of the administration, have started understanding that I am no less than them,” she shares. Though she has employed male staff from the locality to help her, she sometimes handles the cremations single-handedly.

Both the crematoriums have a minimum of seven bookings on a normal day and the duo say that it’s sometimes emotionally stirring to see families lose their dear ones. “Though I have accepted the fact that death is inevitable, to see untimely deaths due to accidents, suicides and other reasons…it’s hard to see people human bodies turn into ashes. But we try our best to give our support to the families that come here,” adds Esther.