Rise of the planet of robots 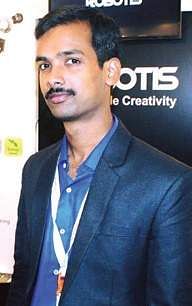 “The teaching will be mainly via live online sessions. Later, the courses will be made available in recorded format. We are also planning offline classes,” says Lentin Joseph, founder and CEO, Qbotics Labs. “The future plan is to provide a job portal for robotics, certified courses in robotics and hands-on workshops. The aim of the academy is to create awareness on robotics and create more robotics engineers.”

In the first phase, Robocademy will start with teaching robot operating system. The course will be free for select students, he says. “Our team is capable of doing various aspects of programming a robot. The main capabilities include robotic simulations, robot modeling, robot perception and robot intelligence. One of our major achievements is the use of C/C++ and Python, and we make use of the robotic framework such as the robot operating system and computer vision libraries such as Open-CV and PCL,” says Lentin.

Chefbot robot
Ever fancied a robot serving food in restaurants? If things go as planned, you will soon see robots staffing restaurants near you. Designed and developed by Lentin, Chefbot is an intelligent robot that functions on autonomous mobile navigation.
Customers place orders through the digital menu, and the Chefbot delivers the order to the table. The ground work for the project began a few years ago, and it’s poised to be implemented in a few years. Lentin took his baby steps towards the Chefbot around five years ago, and the prototype is now ready.
“During my studies at Federal Institute of Science and Technology, Kochi, I had built a social robot which can interact with human beings. After my graduation, I joined a robotics-based company, Energid Technology, later known as ASIMOV Robotics. Three years later, I started my own company in January 2014,” says Lentin.

Books on robotics
Apart from developing robots, Lentin has written three books on robotics, with ROS Robotics Projects being the first one. The book is an exclusive account on robotic projects using robot operating system. The second one, Mastering ROS for Robotics Projects, is an advanced guide to learn the robot operating system. The third one Learning Robotics using Python is about building an autonomous mobile unit from scratch. It includes requirement, design, construction and building software for the robot. The software for the robot is made using ROS.

War of Robots
Lentin has been participating in many editions of ICRA Robotics Challenge since 2015. ICRA is the biggest annual robotics conference in the world which attracted teams that built ground robots that used shooting mechanisms to combat other robots, and the performance of the robots are monitored by a specially designed judging system. Qbotics Labs was a finalist of ICRA robotics challenge HRATC 2015 and the winner of ICRA robotics challenge HRATC 2016. The aim of HRATC 2016 challenge was to find mines from an unknown terrain using a Husky field robot.
For details visit: http://robocademy.com  or  http://robocademy.in