H uman existence in India dates back to over two lakh years, a fact that was discovered on one fateful day in May 1863, when British Geologist Robert Bruce Foote dug up a primitive axe in the non-descript town of Pallavaram.

CHENNAI: H uman existence in India dates back to over two lakh years, a fact that was discovered on one fateful day in May 1863, when British Geologist Robert Bruce Foote dug up a primitive axe in the non-descript town of Pallavaram. Artist and documentary filmmaker, Ramesh Yanthra has documented the works of Foote in his film The Father of Indian Pre-history, which will be screened today in the city. CE speaks to the ace filmmaker about his experiences and behind-the-scenes tales of making the film.

“Paintings and sculptures are meant for documenting our cultures. But around four years ago, I shifted to the audio-visual format — documentary films, because these days people turn to YouTube for everything!” says Ramesh Yanthra. His first film was about the Gudiyam caves, an important pre-historic place where Palaeolithic-age humans lived about two lakh years ago, about 70 km from Chennai. 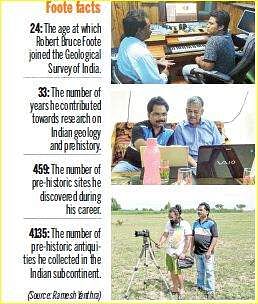 “At the time, there was not much information online about this place and no one knew about it. I created the Wikipedia page after making the documentary,” he says. These caves were identified by Foote, who came to Madras in 1858, and found a stone tool in the hills of Pallavaram which led to the discovery of the caves. “He thus changed the entire history of India, and is known as the Father of Indian pre-history.”

The 25-minute documentary covers all the geological findings attributed to Foote in his 33 years of service in India. He identified that the Palar River originally flowed through Pulicat and that the sea was originally till Pallavaram, where he discovered a sea shell in a well in the area. In the three years it took for the making of the film, Ramesh discovered the house in Yercaud where Foote lived after his retirement. He was also able to trace his great grandson, Jonathan Foote, with great difficulty and with the help of historians in his hometown, Cheltenham, England. “He told he was grateful that he could learn more about his own great grandfather,” he smiles.

Foote was also an artist, often sketching various places that he discovered. “I personally visited and shot the same places that Robert drew. I found these places with the help of historians in the several cities,” he explains enthusiastically, adding that most of the places, like Panchamalai in Salem remain just as in his drawings. Some of Foote’s other drawings show Kanyakumari before the arrival of Vivekananda statue, and a hill in Salem which takes two hours to the top. Based on the findings that he gathered, Ramesh plans to make another movie about the life and works of Robert Bruce Foote soon.

‘The Father of Indian Pre-history’ will be screened today at the Government Museum, Chennai at 11 am. For details, call: 281937781