Veranda Playschool, which has been conceived by three co-sisters, will focus and nurture your child’s natural instincts.

Veranda Playschool, which has been conceived by three co-sisters, will focus and nurture your child’s natural instincts. Set to open in July, they follow the Theory of Multiple Intelligence and assess students during the one year course .

CHENNAI:Remember old movies where you see children playing pallanguzhi or goli on the thinnai of their houses, while the elders chat or cut vegetables keeping an eye on the kids? The thinnai was an extension of the home, and children first learnt numbers by counting golis. This instinctive way of learning while playing is what Veranda Playschool wants to bring back to the city. Modelled on the ‘thinnai pallikoodam’, learning here happens naturally without gadgets and kids can explore their early natural instincts at will. 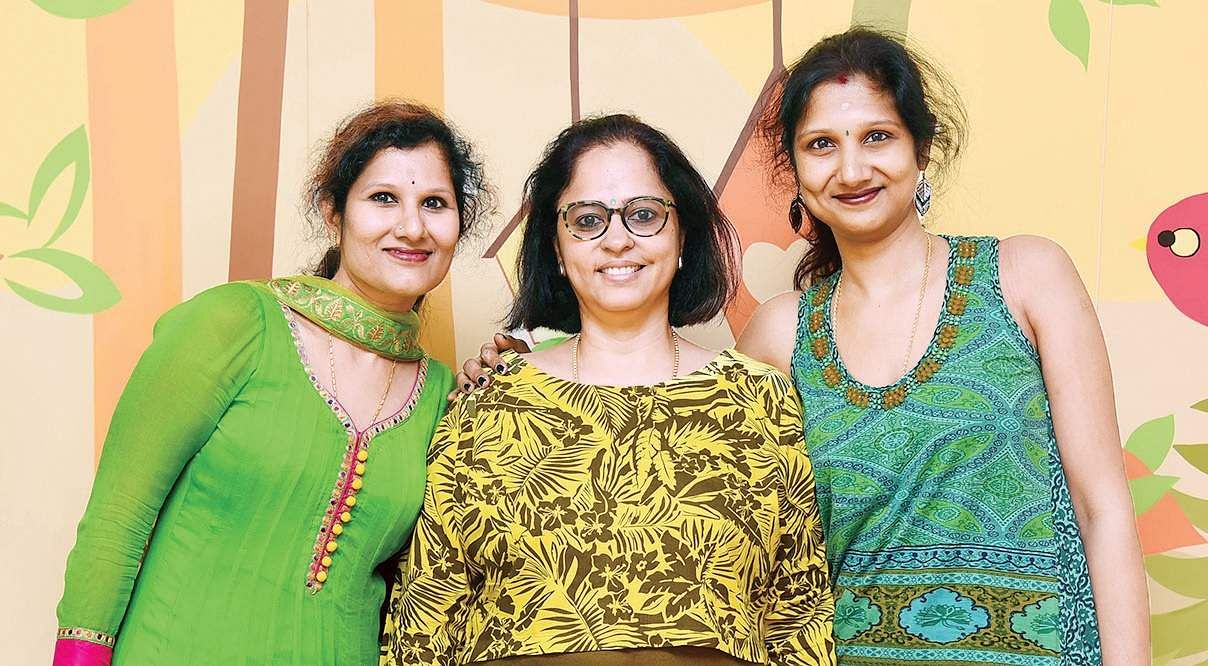 “Our curriculum is based on the ‘Theory of Multiple Intelligences’ concept. We firmly believe that each child is unique and we teach them according to their own intelligence.

For example, the concept of numbers can be taught with rhymes, stories, or with physical activities,” explains Andal Aghoram, one of the founders of Veranda Playschool. Coming from a joint-family, she and her co-sisters, Mahalakshmi Ganesh and Meenakshi Suresh, were always been surrounded by kids and have the experience of taking care of them. Remodelling their two-ground house, with an expansive lawn in the front that is now a shaded green playground, they’re all set to open the school in July.

The theory of multiple intelligence (MI), proposed by Prof Howard Gardner at Harvard, states that every child has eight types of intelligences — musical, logical, and intrapersonal to name a few — and the curriculum focuses on each child’s intelligence. “Some kids may not be interested in building blocks, but will be interested in dance and music. So according to their own intelligence, we will teach them numbers, alphabets etc. By the end of the year, we will tell the parents which intelligence category they fall into,” says Mahalakshmi. Building self-confidence at a young age is most vital for self-image of the child in later years, and teaching through MI is motivating as the child will learn through something that he/she is naturally good at.

Spread across two floors, the rooms have a plethora of information spread on their walls in plain sight, to induce the curiosity of the child to ask ‘what is that’. “Each room will teach them something. For instance, the reading room has a wall mural of the solar system. They will see it daily, and eventually know about the solar system,” she adds, taking us on a tour of the school. Likewise, each room has similar inducers on the walls — a huge painting of the world map with each nation’s indigenous animal on the wall, the play-gym is inscribed with a yoga wheel and so on. There is an art room with strategic taps to clean inevitable messes, a plush-floored theatre room with an AV, reading room, maths room and a sensory room with textures and smells to invigorate sensorial learning.

Each classroom of 15 students will to have two teachers and a caretaker. “The most important criterion I look for in a teacher is their love for children. More than experience or qualifications, they should have a natural connect with kids,” says Andal, adding that they’re also training teachers with MI workshops.
When it comes to safety, the three have no made no compromises. “It’s an all-woman show here. Each child’s admission form will have photographs of three family members authorised to pick them up.

Though the rules may be strict and inconvenient, the child’s safety is most important,” adds Meenakshi.
In today’s age where both parents work, Andal urges parents to send their children to playschools, where they can mingle with kids their age. “Kids need an enabling environment to learn social skills, manners, empathy etc, which can only be inculcated while being with other kids. And this is the age where they can learn all this naturally, because from LKG there is pressure to learn,” she avers, adding that a playschool is better for a child than leaving a the child home with a nanny.

Theory of Multiple Intelligence
Developed in 1983 by Howard Gardner, professor of education, Harvard University, the theory differentiates intelligence into specific ‘modalities’, rather than seeing it as dominated by a single general ability. They are: