‘Always save yourself first’

With the increasing number of drowning victims, the World’s Largest Swimming Lesson was held in the city to promote various swimming skills and drowning prevention.

CHENNAI: World’s Largest Swimming Lesson (WLSL), an annual event aimed at promoting swimming skills and drowning prevention, is given every year on June 22 and it made its debut in India three years ago. This year around 4,000 people participated at WLSL in India and in Chennai swimming lessons were given across six swimming pools for 12 hours in an attempt for a Guinness Record. 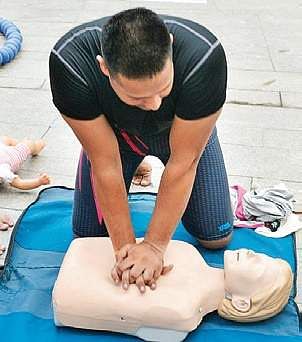 “In a road accident, the victim is visible. But in the water, it’s not so, especially in beaches if one drowns there, the body can be washed ashore anywhere, based on the tide. And at night it’s hardly visible,” says Tarun Murugesh, lifeguard and first-aid trainer, Rashtriya Life Saving Society, India, which is the official branch of Royal Life Saving Society Commonwealth, a non-profit training organisation specialised in water safety, structured across 19 states in India. “We always say swimming is one skill everyone needs to learn, not to save others but themselves. There’s more water than land in the world, and you know, they say the world’s going to come to an end because of water,” he laughs.

Children and adults alike took part in the event to learn swimming and life-saving techniques. “Kids learn safety when taught through games and activities,” he explains. The foremost technique is dry rescue — without getting into water. You can throw a rope or pole to pull the drowning person out.  “When you stand at the edge of a pool holding a pole, you might get pulled in. Always lie down, so there’s more gravity, and then pull. If you are using a rope, tie one end of the rope under your feet first,” he advises.

They conducted live demonstrations to show how you have to always pull the person from the back if you get into the water, otherwise the person will pull you down in panic. “Never catch the hair and pull. When you pull a person with their hair over 15-20m, or in cases of the beach it’s as far as 200m, you save the person; but the entire weight, when unconscious, is more, and they might dislocate their spinal cord. They won’t die but they’ll have to use a wheelchair for the rest of their lives,” he says, adding that if you save, save the right way. “There are incidents where people try to save others and drown themselves.

Know when to let go — don’t become the next victim,” he warns. If you can’t calm the person, splash water on their face, or gently push with your feet on their chest, create space and go under and catch them. He advises, “You should always control the victim, don’t let the victim control you.”

The training also included how to recognise swimmers — a non-swimmer appears to be trying to climb vertically up but failing to; a weak swimmer has weak body movements and tries to swim horizontally; an injured swimmer holds up the injured part and cries for help; a drowned victim will be at the bottom of the pool. Always save the non-swimmer first, then proceed in hierarchy. D Jayaraman, secretary, Tamil Nadu State Aquatics Association and coach at Savera Hotel says, “A coach should not take more than 10-12 people a class.”

Stay up to date on all the latest Chennai news with The New Indian Express App. Download now
TAGS
World’s Largest Swimming Lesson