Royal tales by a prince

Pratap Sinha Rajebhosle, prince of the royal family of Thanjavur, is doing his bit to preserve the history of his lineage. He talks to CE about the Thanjavur Maratha kings, the scholars among them.

CHENNAI: Call me Pratap,” says the bespectacled, unassuming young man we meet on a balmy afternoon at a popular social club on Mount Road. A far cry from his given name, and farther still from his honorific title — His Highness Pratap Sinha Rajebhosle, prince of the royal family of Thanjavur, who easily dispenses with the formalities with his friendly nature.

A descendant of the Thanjavur Maratha kings who annexed it in the 1600s, the young royal is charting an interesting path as a heritage enthusiast as he goes about preserving history through the medium of the time. CE caught up with him for a tête-à-tête on his efforts of preservation and how he hopes to inspire a generation to look back in time. 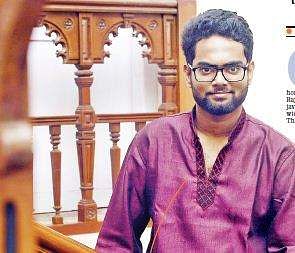 “Most people would be surprised to know that it was actually Marathas who were ruling Thanjavur for a period of history, and that we are from that ancestry,” says Pratap, who has descended from a line of kings going back to Shivaji’s half brother, Ekoji II. He is also the sixth descendant of Serforji II, who ruled Thanjavur from 1798-1832 and forms a prominent narrative in his discourse on the erstwhile rulers.

The Thanjavur Maratha kings were patrons of several fields from art and culture to medicine and cuisine, informs Pratap as we quiz him on the origins of his keen interest in family history. “I’m very proud that I’m from that lineage, but I was raised in Chennai and I have always been a city boy.

I’ve done my schooling and college here, but whenever I went to Thanjavur I would see the idol of my great-great-grandfather (Serforji II). During a vacation after my Class 12, I spent a lot of time in Thanjavur and Maharashtra satiating my curiosity for history.”

Tidbits and nuggets of informationabout his ancestors make him proud. For instance, Serfoji II had established the first Devanagri printing press in the country. But even people in Thanjavur weren’t aware of this spurred him to take it upon himself to do something for awareness sake.

“The histories of the royal families of Baroda, Gaekwad, Satara and more are common knowledge to people in their region. In Thanjavur, not many people are aware about this, despite running a museum called Serfoji Memorial Hall Museum in the palace premises since 1997,” rues Pratap.

He felt the urge to redress this gap by taking it to the public through the — the internet, and in particular Facebook. “I started a Facebook page in the name of the museum in 2013, and the response was phenomenal. I started researching more and came out with a book, Contributions of Thanjavur Maratha Kings, in 2015.” All this, while he was still an engineering student! His main source of credible information was the centuries-old Saraswati Mahal Library, Thanjavur, also established by one of the erstwhile kings.

But what is it that makes their achievements so remarkable? “Do you know that what was probably the first-ever cataract operation in India was done by King Serfoji II, with his own hands?” asks Pratap. “Such was the extent of scholarliness of the Thanjavur kings.

Even when the East India Company took over, the British were favourable to the kings, because of their education. The popularity of the Maratha kings was shown in a recounted letter by a resident of Thanjavur who recorded the tens and thousands of natives who turned up for one of the funerals of the kings. Not to mention the hundreds of historically important documents archived at the Saraswati Mahal Library that requires preservation.”

The prince has even completed a Museum Conservation course in 2014 at Egmore Museum, while also doing a certificate course in Modi script at Thanjavur. He maintains an active blog in which weekly he elaborates on a particular aspect of Thanjavur-Maratha history from credible sources.

“I am also looking to launch an app by the end of this year to better spread these sources of history,” he adds. He is also involved in finding ancient manuscripts and scanning and uploading them for conservation purposes.