A 9th Century shrine for Shiva and his disciple

Madhavaram, situated in north Chennai, and once known as Mahatavapuram, is home to several temples of which the Vishnu temple dedicated to Kari Varadaraja Perumal and the Siva temple known as the Kail

CHENNAI: Madhavaram, situated in north Chennai, and once known as Mahatavapuram, is home to several temples of which the Vishnu temple dedicated to Kari Varadaraja Perumal and the Siva temple known as the Kailasanatha temple are well known.

An inscription found in the Kailasanatha temple mentions that this place was called Ekadhira-chaturvedi-mangalam in the Pallava times of the 9th century AD Ekavira was the title of Nandivarman II Pallavamalla, an illustrious Pallava ruler. Chaturvedi-mangalam refers to a place peopled by scholars who were conversant with the four Vedas. The deity was at that time known as Kailasadeva. This inscription refers to an organisation called Alum-ganam which was an administrative unit of the village. Ekadhira-mangalam was situated in the geographical subdivision called Puzhar Kottam.

In the main sanctum-sanctorum (garbha-griha) of the east-facing Kailasanatha temple is a huge Maragatha Lingam about four-and-a-half feet tall and a large Linga Pitam (Avudaiyar) with a circumference of about 16 feet. Facing this Lingam in the outer circumambulatory passage (prakaram) is a big Nandi. Goddess Parvati in this temple is worshipped as Karpagambal. 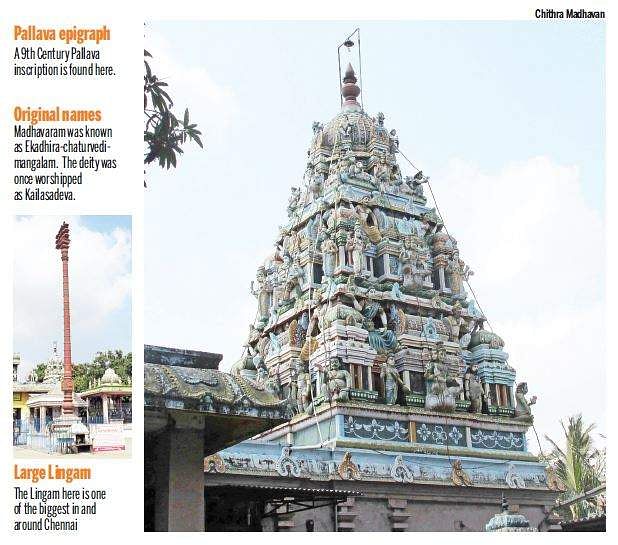 There are numerous shrines in the prakaram for the great devotees of Siva namely Appar, Thirugnanasambandar, Sundaramurti and Manikkavachakar; Valampuri Vinayaka; Subramanya with Valli and Deivayanai; Gajalakshmi; Sarabeshwara (a fierce form of Siva); Bhairava, Navagraha, Aiyappan and Hanuman. Separate sanctums for Dakshinamurti, Durga and Adi Vinayaka are also seen. The tank in front of the temple occupies an area of about three acres and is possibly the largest in this area.
The Kailasanatha temple, prior to the 1970s, was in a dilapidated condition, but thankfully has now become a popular religious centre.