The incident, which took place last week, has irked students, who are up-in-arms calling it a violation of their privacy and dignity.

CHENNAI: IIT Madras was in the centre of a raging controversy after a hostel office allegedly put the details of a student caught with used condoms inside his room on the notice board.

The incident, which took place last week, has irked students, who are up-in-arms calling it a violation of their privacy and dignity.

The hotel office, besides imposing a fine of Rs 5,000, has allegedly chosen to publicly shame the student for possessing condoms. Express accessed the hostel notice where the name of the student, details of items found in his hostel room, were mentioned. 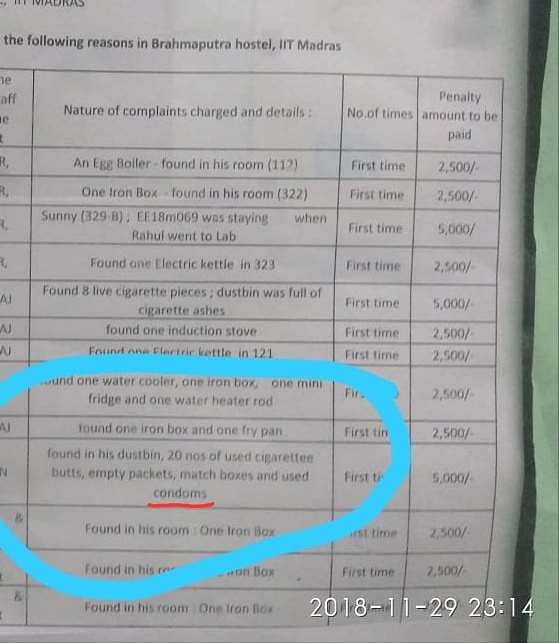 Students alleged that the vigilance officers barged into their rooms, clicked pictures without consent and insulted them. A female student told the Express that there has been rampant harassment and moral policing prevalant in the campus. A student survey conducted last year, which documented moral policing revealed harrowing tales. "A vigilance security officer asked if the room and bed was comfortable enough when I was at a boy's hostel during their visit," a student said in her testimony.

Meanwhile, Sriram K Kompella, Student General Secretary, has appealed to the students to bring grievances, if any, before the Student Legislative Council (SLC). "Vigilance staff have been sensitised about being polite and to make sure the privacy and dignity of the student are maintained. Photos, if taken, are only for proof of violation. At no cost, Dean, Students Office, or hostel management office has and would indulge in insulting any student," he said.

The Dean Students' office refuting allegations, said, "No hostel office has done this act of publishing student details on the notice board. The institute will enquire further about this deviation, if any at all."