CHENNAI:The proposed Kattupalli Port expansion would not only threaten the Pulicat Lake but endanger salt pans as well and cause more sea erosion, say environmentalists.In 2012, the Indian Space Research Organization’s Space Application Centre (SAC) predicted in its report, Coastal Zones of India, that 10 lakh people and 144 sq km of land in Chennai are in danger of submergence by 2050 due to sea level rise. SAC’s report says that Chennai stands to lose 3 sq km of critical industrial infrastructure, mostly in Ennore. Rise in sea level is caused by climate change as well as by man-made interventions such as ports and harbours.

M Raman, first Chairman-cum-Managing Director, Ennore Port, has echoed the environmental concerns and said when environment clearance was granted for Ennore Port, one of the conditions was that there should not be any development towards the northern side. The current ‘minor’ Kattupalli port itself is an aberration as in 2004, Integrated Coastal and Marine Area Management Project Directorate of Ministry of Earth Sciences prepared a shoreline management plan for Ennore, which says that any development further north will pose an inevitable threat to Pulicat Lake.

The land ownership details in the PFR and Form 1 submitted by Kattupalli Port-operator Marine Infrastructure Developer Private Limited (MIDPL), a copy of which is with Express, reveal that the Port expansion will be carried out in 2120.28 hectares, which includes 136.28 hectares of existing area, 761.8 hectares of government land, 781.4 hectares of private and proposed sea reclamation of 440.8
hectares.

MIDPL, acquired by Adani Ports and Special Economic Zone Limited, is already in discussion with concerned state authorities for acquisition of said land for using it for development of port backup infrastructure facilities as per Revised Master Plan. Total proposed quantity of capital dredging is 40 Mm3 (million cubic metre) and the dredged material will be used for reclamation and level-raising.

This apart, two new Breakwaters of a total 9.35 km length is proposed, of which new Northern Breakwaters will be about 6.2km and 1.3km and new Southern Breakwater will be about 1.85km.Environmentalist Nityanand Jayaraman said it is not just Pulicat Lake that will be hit. “If the salt pans, which fall under CRZ-1, are built upon people will be left defenseless when disasters like flash floods or tsunami strike. Salt pans are buffer and act as natural barriers. There is a very narrow sand bar that divides Bay of Bengal and Pulicat lake near the lighthouse and the stretch is fast eroding due to Kattupalli port. With the proposed expansion, the lake will merge with the sea which will severely dent fisheries and overall ecosystem.”

R Natarajan, Head, Corporate Affairs (South), Adani Ports, however, rubbished claims that proposed Kattupalli port expansion would affect Pulicat lake. “Pulicat lake is about 15km from the port. The expansion will have no bearing on the lake. While conducting EIA studies, which will take about a year, all environmental norms will be kept in mind. As per CRZ Notification, 2011 certain port-related activities are allowed in CRZ areas and the master plan has been prepared accordingly otherwise the proposal would not go through the clearance process,” he said.With regard to sea reclamation, Natarajan said as of now there was no reclamation being done. It is only envisaged. A detailed study has to be conducted, he said. 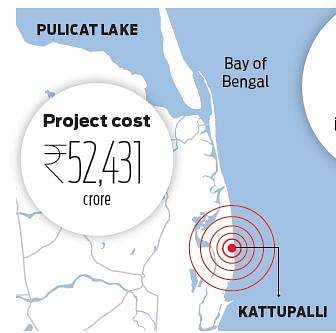 Now we are on Telegram too. Follow us for updates
TAGS
Pulicat Lake Kattupalli Port expansion