Five women study water accessibility and sanitation in 75 streets in Triplicane and Royapettah, find water contaminated for drinking and domestic purposes. Broken public handpumps and irregular supply of water make this elixir of life a luxury

CHENNAI:Five women in the city have taken the responsibility to ensure provision of safe water. In parts of Royapettah and Triplicane, the water supplied by the Chennai Metro Water Board is so contaminated with sewage, it could not even be used for domestic activities, besides drinking.The findings are a part of the survey conducted by these five women who are cooks, tailors and vegetable vendors by day but in the evenings, they set out to survey around 75 streets in these areas.

LS Jaleela, N Manju, M Vijayalakshmi, P Ramani and D Kanniammal were a part of the NGO ‘Roshini’ founded by lawyer-activist Bader Sayeed, working on the project that assesses water accessibility and sanitation, designed and coordinated by city-based NGO ‘Prajnya’.“We set out to finish the project much sooner. But it took us around a year because for the women, various everyday commitments get in the way,” said ACR Sudaroli of Prajnya.

With broken public handpumps and irregular supply, accessibility of water in these areas is a luxury, finds the report. While only 1% of respondents in both Royapettah and Triplicane claimed to have abundant water, 24% of respondents in Triplicane and 44% in Royapettah said that they receive water ‘rarely.’
“Since many of us live in one of the two areas, residents were generally forthcoming with the issues that bother them,” said Vijayalakshmi, who works as a cook in Triplicane. 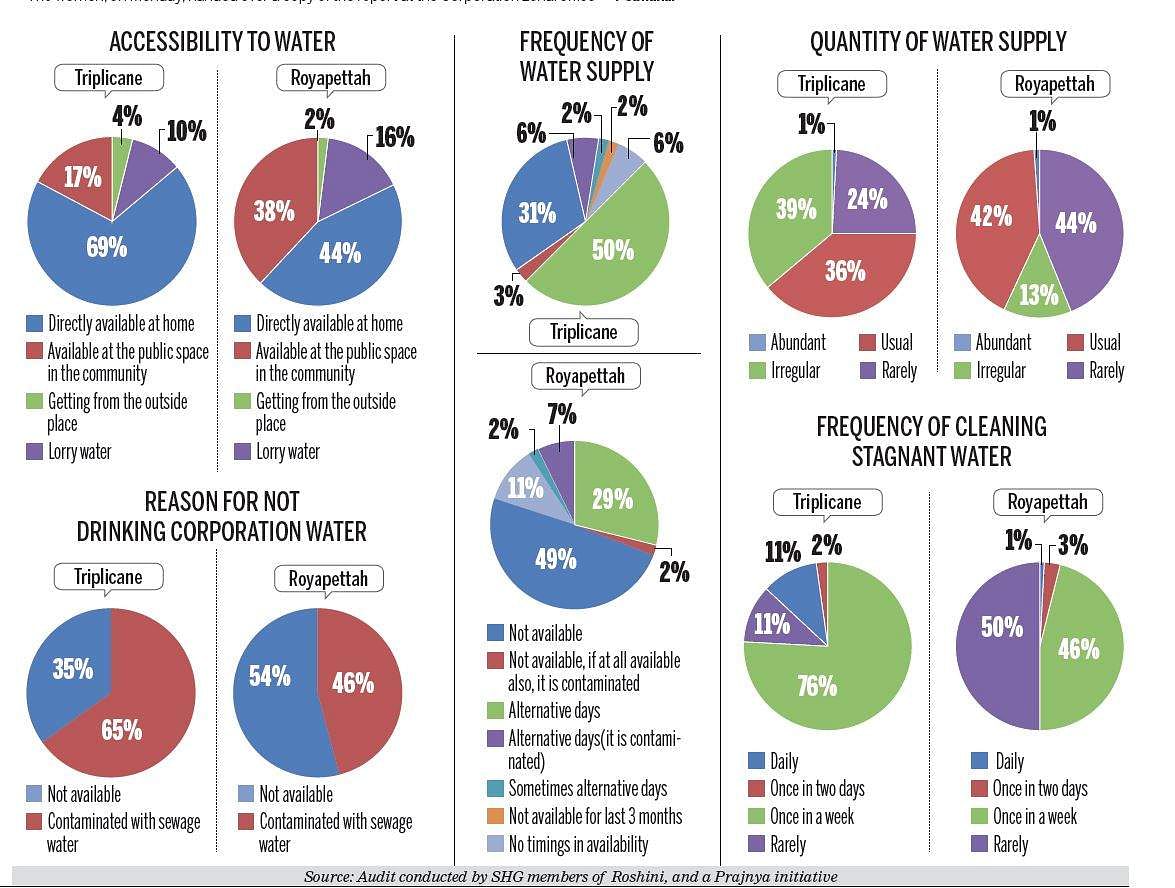 Garbage bins and public toilets were not cleaned regularly in these areas, the report found, and neither was stagnant water, during rain or otherwise. As far as toilet usage is concerned, although a large number of people claimed to use toilets, 83% respondents in Triplicane and 75% respondents in Royapettah said that they had to depend on water from outside for toilet usage because water was not available within toilets.
However, to the City Corporation’s credit, 73% respondents in Triplicane and 90% in Royapettah said that waste was collected from their doorstep by corporation staff.

The women, on Monday, handed over a copy of the report at the Corporation zonal office and planned to submit a copy to the Chennai Metro Water and Sewage Board officials. “This is not the first time that we’ve conducted audits. Our first one was on safety, particularly for women in these areas and we are also looking to perform an audit on the elections,” said Sudaroli. “We are also looking to expand our areas of coverage,” she added.