A Plateful of Perfection

CHENNAI: It all started when I visited Thailand and fell in love with Thai Curry. I decided to try it at home as directed by the chef,” says 27-year-old Prachi. Her culinary journey started three years back. The curry got her good reviews from her family members and she started cooking more. “My father gives me the most honest food reviews. If he says it is not good, I don’t even list it in my menu,” she says.

She started Prachi’s Kitchen in 2016 when she was studying digital marketing. “During my course, I was asked to design a page about food, and that’s when I came up with the idea to start my own food business,” she says. Now, she also conducts workshops, and caters to party orders. 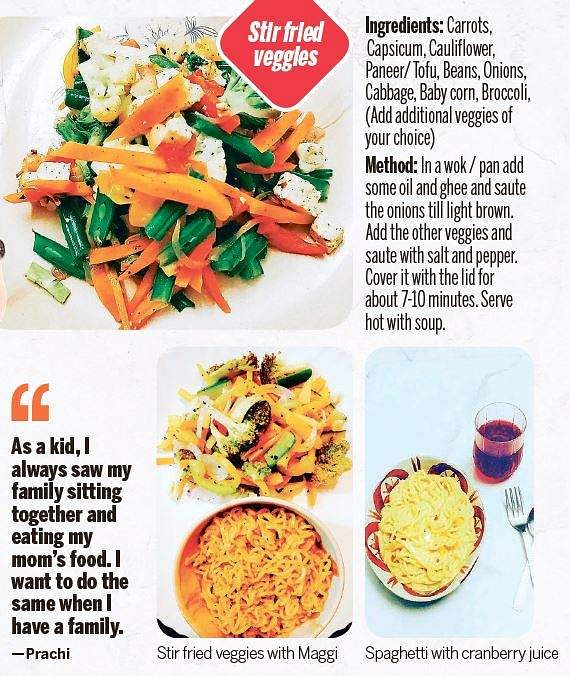 Born in a joint family, she never had the necessity to enter the kitchen and try her hand at cooking. “I had a lot of women in my house, and I never had the opportunity to cook,” says Prachi. But when she saw her mother being appreciated for her cooking skills, she gave cooking a thought. “My mother usually makes traditional north Indian food like theplas and khandvis. Seeing her get an appreciation for her cooking, I was really inspired to try some of the traditional Gujarati items. My family loves the theplas I make,” she shares.

Her passion for cooking pushes her to balance her daily cooking commitments and her work as a digital marketing professional. “I think if you are really passionate about what you do, time is never a constraint. The happiness and satisfaction that I see on my customers’ face once they get their orders, pushes me to reach out to more people,” she says.

Though she moved to Chennai from Gujarat 15 years ago, Prachi is a true Chennaiite. Her love and affection for people of Chennai also reflects in her kitchen. Her comfort food is rasam rice and poriyal.
To beat the heat in the city, she makes popsicles. “Popsicles are tricky items to make. The mixture should have more fruits and less liquid to avoid overflowing while it sets. Also, fruits will add to the flavour of the popsicles,” she says. She has made popsicles using berries. She now wants to try making mango popsicles.
Like in every kitchen, Prachi’s too has seen a lot of trial and error, and some disasters too. “I tried baking a cake for my sister’s birthday and it turned out hard like a stone. I vowed to never bake again,” she says. Prachi is also particular about making every dish with perfection. “I don’t feel good if my puris don’t puff or the masalas aren’t ground properly,” she adds.

Prachi’s Kitchen sells north Indian food but the pastas she makes are most sought after. “The reason I started to cook at home is because people are tired of eating at restaurants. I want them to have a good home-cooked meal,” she says. Prachi runs the show without any assistance. But her mother is particular that she leaves the kitchen spick and span. “My mom likes a clean kitchen. Whether I am cooking for 20 or 200 people, she needs her kitchen spotless as soon as I am done with cooking,” says Prachi.
Her only aim is to bring families together through food. “As a kid, I always saw my family sitting together and eating my mom’s food. I want to do the same when I have a family,” she says.

Method
Boil the penne in a saucepan with little oil and salt. In a wok / pan add some butter, garlic and the spices. Add tomato sauce or the puree and stir it in a low flame. Add 1/2 spoon of soy sauce and 1 spoon of chilli sauce. Add salt and pepper as per taste. Add the boiled pasta and stir it. Cover the lid and allow it for 5-7 mins.  Garnish with basil leaves, oregano and chives. Serve hot.