The yoga asanas in our daily chores

For most of us, household activities are an exercise in routine. On World Yoga Day Yogacharya S Sridharan explains the physical and mental aspects of yoga behind daily chores.

CHENNAI: For most of us, household activities are an exercise in routine. On World Yoga Day Yogacharya S Sridharan explains the physical and mental aspects of yoga behind daily chores. The 79-year-old is a consultant therapist, faculty and yoga teacher trainer at Krishnamacharya Yoga Mandiram.

He begins to explain Kriya yoga, a form of yoga, as an example. Kriya is also called action-based yoga or yoga in action. There are two approaches to this. “Every action has got a mental and physical approach to it. Particularly the household chores become mechanical over a period. You have to sweep the same floor, with the same broom and in the same way. Similarly, washing clothes and cooking. Suppose you want to cook, you take a pot, place in on the stove, add ingredients and this goes on. Considering the mental aspect, if I ask you to recall how you cooked or how much salt was added, you will not be able to say. It’s registered in our systems and we fail to put in extra efforts to improvise it,” he explains. 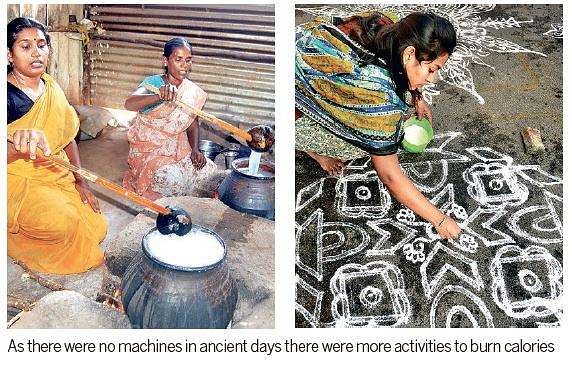 The specialty of implementing kriya is that there is no mechanical but a mindful way of performing every activity. Mindfulness is being aware of an activity. “That’s the reason why every person’s quality of action is different. Mindfulness is meditating during the activity. When the mind has a sense of meditation and complete involvement, the work gets qualitatively far superior. Even while cooking, there is a difference in how a yogi and a non-yogi cooks,” he says.

The physical aspect is more about the movement and exercise to different parts of the body. There was no mechanisation in ancient days and there were more activities to burn calories. Modern-day gadgets have taken away a lot of physical work and made our lives sedentary. Yoga might be helpful in restoring the physical part of work that has been lost. For instance, obesity. India is a comparatively older civilisation but like other western countries, obesity has taken roots among the younger generation here too. The fat is predominantly restricted to stomach and abdomen. “When there is too much weight around the navel it is a cause for diabetes and blood pressure. Earlier, we used to sit and cook, bend and clean the floor. I see yoga as a holistic perspective with relevance behind all these activities,” he says.

So what are some of the simple asanas to follow every day? “Start with simple yoga to make daily work interesting. Depending on the body type, different people might want to practice different yoga asanas. Starting a day with surya namaksara activates all parts of the body. Dog pose, camel pose and triangle or trikonasana are basics that anybody can practice. Shavasana or the dead body pose is a nice way of relaxation after work,” he says.

If someone bends forward to sweep the floor, it resembles Uttanasana
Squat position for making Rangoli on the floor is Utkatasana