A cloud of gloom looms over e-cigarette users after the Tamil Nadu government decided to ban the use, sale, manufacture, import or distribution of these battery-powered devices.

CHENNAI: A cloud of gloom looms over e-cigarette users after the Tamil Nadu government decided to ban the use, sale, manufacture, import or distribution of these battery-powered devices.

“This is a terrible move and it shows their ignorance,” said Akash Kumar*, who gave up smoking after using an e-cigarette. “Why not ban everything then? Cigarettes and alcohol are more harmful but because the government gets revenue out of it, they won’t touch it.”

Shreyas Madhan, who is one of the directors of the Association of Vapers India, found that his breathing improved after making the switch to an e-cigarette. “My first confirmation of its benefits was during the 2015 Chennai floods,” he said. “I ran five floors up and down at the metro station overtaking teens while carrying two bags. My earlier smoking self would have passed out.” 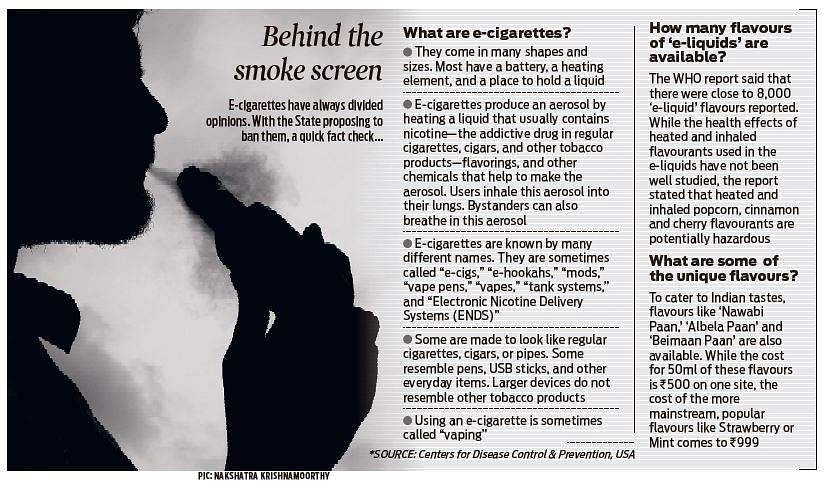 A World Health Organisation report on Electronic Nicotine Delivery Systems (ENDS) published in 2016 said these devices were likely to be less toxic than cigarette smoke but were unlikely to be harmless.
“Smoking is a very dangerous habit and being exposed to that in the form of an e-cigarette is equally harmful,” said Dr Sivaram Ganesamoni, surgical oncologist at RECNAC Oncology Clinic. “It can expose a non-smoker to potentially get addicted to the habit of smoking, and later move on to a conventional cigarette. For a smoker trying to quit smoking, it may be beneficial to help wean off the habit. While this was the purpose of the e-cigarettes, it has not happened in practice.”

ENDS contain nicotine, the addictive component of tobacco products which is making doctors wary. “E-cigarettes are less harmful,” said Dr R Balaji, surgical oncologist at Apollo Hospitals. “The risk is almost negligible as the carcinogenic elements are at very low levels. The main concern is that it possesses addictive substances, like nicotine, which can lead to substance abuse. The long term effects of these devices has to be looked into but if it is being used as a means to wean people off smoking, which is why these devices were created, then it is a positive measure.”

In 2016, the North East Hills University (NEHU) conducted a study on ENDS. Their findings showed that ENDS had ‘minimum health and safety concerns’ compared to conventional cigarettes. “Although some gaps remain to be filled, our study conclusively establishes that ENDS offer smokers a far safer alternative way to consume nicotine, which itself is relatively harmless,” the study said.

Flavour is one of the most significant reasons why these devices are popular, especially among youngsters. “I started vaping two years ago and I love it,” said 26-year-old, A Jayalakshmi*. “There are so many flavours to choose from and unlike a hookah apparatus, it is so convenient. I have tried over 10 flavours but my all-time favourites would be Vanilla and Tiramisu.” For Akash, ‘Killer Custard’ and ‘First Love’ (which tastes like strawberry cheesecake), were his flavours of choice.

Now we are on Telegram too. Follow us for updates
TAGS
Tamil Nadu Doctors E-cigarette