CHENNAI: With the proposed Bengaluru-Chennai Expressway likely to have largescale ecological impact, across Tamil Nadu, Andhra Pradesh and Karnataka, the Expert Appraisal Committee (EAC) of the Ministry of Environment, Forest and Climate Change has directed National Highways Authority of India (NHAI) to conduct a detailed Environmental Impact Assessment (EIA) study and prepare a composite plan to compensate the loss of tree cover through massive tree plantation programme with time schedule and financial outlay. Also, traffic density study was asked to be carried out.

Phase-3 of the proposed expressway will start from Ramapuram village in Gudipala mandal in Chittoor district of Andhra Pradesh to Irungattukottai village in Sriperumbudur taluk of Kancheepuram in Tamil Nadu. 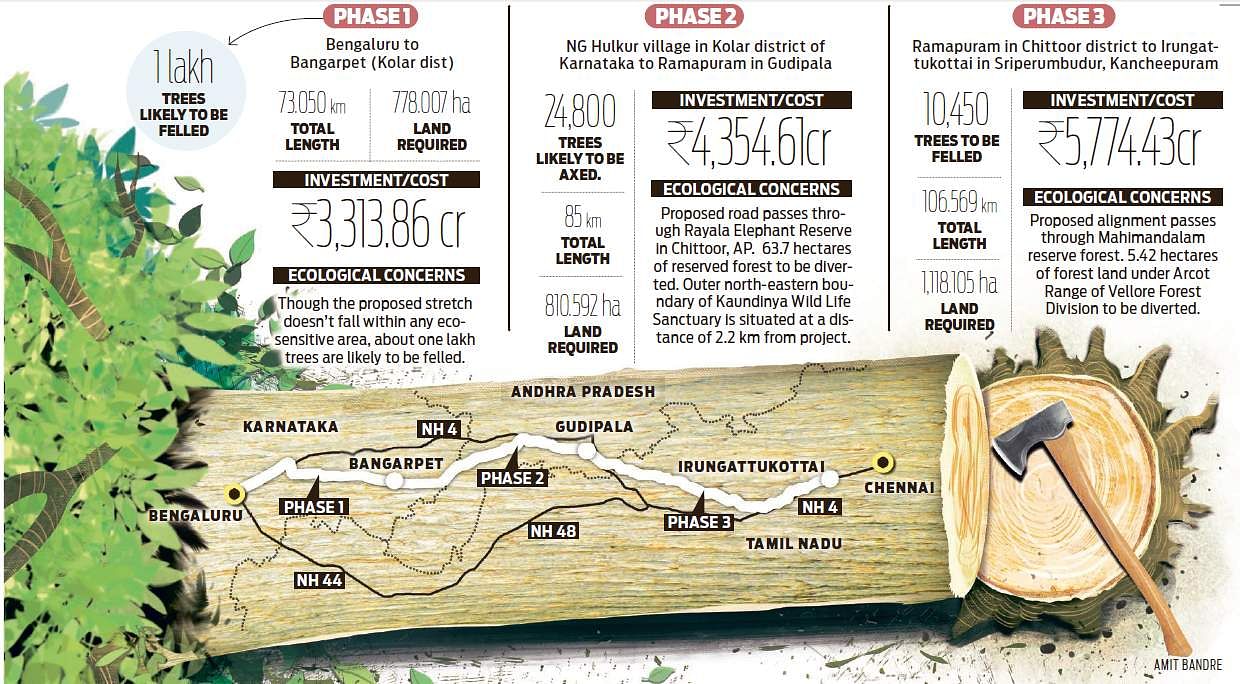 The total length of Phase-3 of the proposed expressway is 106.569 km, which is the longest compared to the other two phases. It will be implemented at an estimated cost of `5,774.43 crore requiring 1,118.105 hectares and is riddled with ecological concerns.

The stretch of the proposed alignment in Tamil Nadu passes through Mahimandalam Reserve Forest and the total forest land proposed to be diverted in Tamil Nadu is 5.42 hectares under Arcot Range of Vellore forest division. An application for forest clearance has already been filed and is under process.

Besides, 10,450 trees are likely to be axed, as per NHAI submission before EAC. Also, 368 structures will be affected due to the proposed road. NHAI officials said the authority will compensate the affected title holders as per the NHAI Act, 1956.

Under Phase-2, which covers 85 km from Bangarpet in Kolar district of Karnataka to Chittoor of Andhra Pradesh, the ecological concerns are far more grievous with the proposed road passing through Rayala Elephant Reserve in Palamaner range in Chittoor West Forest Division. NHAI was asked to desi­gn underpasses in consultation with the Chief Wildlife Warden, Andhra Pradesh for smooth movement of elephants through the reserve. Still, a whopping 63.7 hectares of RF are to be diverted. Besides, the proposed road falls within 10 km from eco-sensitive zone of Kaundinya Wild Life Sanctuary.

The outer north eastern boundary of the sanctuary is situated at a distance of 2.2 km and 24,800 trees are to be axed.

However, the maximum tree cover loss will be reported in Phase-1, where around one lakh trees are likely to be felled. The proposed road starts from Bengaluru and passes through Kolar district covering 73 km.

NHAI officials said the Bengaluru-Chennai Expressway will facilitate high-speed travel via the 90-metre wide expressway, which will run parallel to the existing NH4. Presently, the two cities are connected by two highways: A 372-km highway via Krishnagiri and Ranipet and the other  one that runs for 335km via Kolar, Chittoor, Ranipet and Kancheepuram.