Candidates, who got admissions under all-India quota, demand seats during State counselling 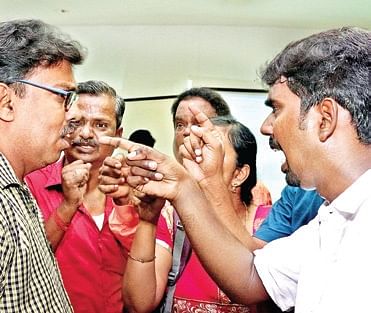 CHENNAI: The second day of counselling for postgraduate medical and dental admissions began with  ruckus after over 20 candidates who were allotted seats in all India quota counselling sat in a  dharna demanding the Selection Committee to allot them seats in State counselling on Sunday.

The NEET-based single window counselling for PG graduate medical and dental admissions for general category began at the Multi Super-Speciality Hospital at Omandurar Estate after being marred by a series of legal hurdles.

Four sets of petitioners had moved the Madras High Court. The court gave an interim direction to Director of Medical Education to include the name of the petitioners in the Tamil Nadu State rank list and allow the petitioners to participate in the State counselling.

“As per SC order we cannot allot seats to the candidates. Also, as per the PG medical and dental admissions 2018-2019 prospectus, the candidates did not have original certificates,” said Selvaraj.
“I got a seat in Andhra Pradesh. I don’t want to study outside Tamil Nadu. I would have got a seat here, had I participated in the State counselling. We are made to suffer because the State started the counselling very late,” said another protester.

Now we are on Telegram too. Follow us for updates
TAGS
PG med counselling Chennai