The substations, which will be commissioned in two years, will benefit the residents of Central Chennai whose power demands have gone up by around two per cent from last year.

CHENNAI: To ease the woes of residents over frequent power cuts and to meet the increasing power demands of Central Chennai, Tangedco has recently procured land from the Greater Chennai Corporation to construct five additional substations in Mylapore and T Nagar.

The substations, which will be commissioned in two years, will benefit the residents of Central Chennai whose power demands have gone up by around two per cent from last year. “From April, 2017 to March, 2018, the demand in central areas of the city alone has gone up by 1.5 per cent. Though since 2015 we have greatly reduced the frequency of power interruptions, these substations will equip us to take up greater loads of electricity,” said a senior official from Tangedco. 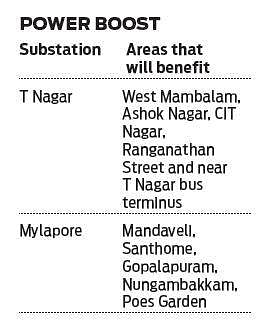 Out of the five, three substations will be located in T Nagar and the two in Mylapore at a total budget of Rs 220 crore, funded by Tangedco.  The substation coming up near Mundakanniamman Kovil in Mylapore will be built at a capacity of 51 megawatt (MW) at a cost of Rs 100 crore owing to availability of more space. The other four will have a capacity of 28 MW each.

These substations will facilitate better distribution of power, reduce power cut duration, provide relief to overloaded electricity cables and will also enable in erection of more high-tension and low-tension cables and distribution transformers. They will ensure that power reaches consumers till the last leg of the power distribution process.

Tangedco has been in talks with the Corporation since 2015 for the allotment of land for this purpose but this was delayed as the local body had required this space for its developmental projects. “A month ago, they finally conceded our request. It was very difficult to procure land in fully developed areas,” said the officials. Apart from this, Tangedco officials said they were in talks with the police department to procure land to set up substations at three locations of Egmore, Pudupet and Foreshore Estate.

Power shutdown on Tuesday in parts of city for maintenance work

Stay up to date on all the latest Chennai news with The New Indian Express App. Download now
TAGS
Tangedco Greater Chennai Corporation