On a historical date with ‘Mahabalipuram’

The name ‘Mahabalipuram’ on a backflip brings back the memories of school picnics that were spent meanininglessly amongst endless sculptures and stone carvings on hot and grimy days.

CHENNAI: The name ‘Mahabalipuram’ on a backflip brings back the memories of school picnics that were spent meanininglessly amongst endless sculptures and stone carvings on hot and grimy days.

However, having committed to taking my cousin Kalpana and her children Sanjana and Shreya and my daughter Sharanyah from abroad on a site seeing tour of Mahabalipuram last week, it was with great hesitation that I started gathering material about the history of the famous tourist spot of the Chennaites.
I went about pulling out my old history books and UNESCO related material to bring myself abreast of Mahabalipuram’s fame and name.

It was with great astonishment and surprise that I realised how fortunate we are to own this tourist spot which is a treasure trove of sculptures and carvings all steeped in ancient history. 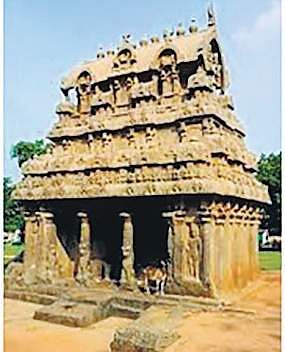 The place was named after the Demon King, Mahabali.  The city flourished and was brought to limelight only in the 7th to 9th Century under the Pallava Rule.

The city was renamed ‘Mamallapuram’ after the Pallava King, NarsimhaVarman I who was also known as ‘Mamallan’ because of his wrestling skills.

With this preface, we made our entry into Mamallapuram by having a darshan of the ‘Sthala Sayana Perumal Koil’ in the city.  It happens to be one of the 108 Divya Desams.

We entered the temple on Thiruvaadi Puram day when the famous Azhvar Aandaal was born.  The temple was teaming with devotees and the Aandaal Sannaddhi was beautifully decorated. Having had a splendorous darshan of Sthala Sayana Perumal who is in a sleeping posture, Thayaar, Aandal, Narasimha Perumal, Aanjaneyar and Boodhathazhvar — the second of the first three Alwars, was born here, we began our site seeing tour.

We first visited the Shore Temple on the shores of the Bay of Bengal.  You are simply smothered by the vastness, spread and size of the temple.

Though barricaded, we were able to catch a glimpse of the broken Shiva Linga in one temple.  The Sayana Perumal temple has been cordoned off, fearing vandalism by tourists. The nandhis, horses, elephants and the variety of sculptures and carvings on every rock there is breathtaking and mesmerizing.

If only you can visualize King Narsimha Varman I, periodically sauntering around the unfolding sculptures and encouraging the sculptors by his very physical presence there, you will realize the enormity of those sculptures and carvings and the attention he paid in turning them out best in the Country, which they really are till date.

We then moved on to the ‘Descent of the Ganges’ and the Ärjuna’s Tapas sculpture. The ancient story about Rishi Bhageerathan praying and doing penance for the holy Ganges to descend on earth and enrich the Indian sub-continent is well portrayed here.

The Descent of the Ganges and Arjuna’s Penance are portrayed in stone at the Pallava heritage site. The relief is more of a canvas of Indian rock cut sculpture at its best and not seen anywhere in India. It is one of the Group of Monuments at Mamallapuramthat were designated as a UNESCO World Heritage Site since 1984. It is astonishing that the entire sweep of the carving is on a single rock.

The intricate detailing and sculpting leaves one dumbfounded.  There are rishis in yogic posture, animals and birds in their natural habitat, men and women also meditating or praying.

I was also drawn to the hairdo of the rishis and men in these sculptures which bear very close resemblance to the Buddhist hairstyle.  This made me wonder about the underlying influence of Buddhism on the later dynasties.

In one corner away from all the frenetic activity, sits one monkey holding another monkey in an affectionate posture.

From here, we climbed up to the Rock cut Ganesha Ratha

The final ratha is the Dharma ratha which is also very artistically carved. Just outside the Draupadi Ratha is the Nakula Sahadeva Ratha with a circular body and a curved dome similar to the back of an elephant. There is also the sculpture of a huge elephant near it, carved with such minute details that you are almost fooled into seeing a real elephant.

I would like to end with a note that Mamallapuram holds so many mysterious secrets of cruel plundering, brave wars and successful reinstatements of the Pallava Raj. If only we had the patience and time to sieve through all the history and schemes and struggles that went into the building up of this great Dynasty and go there to behold their toil and sweat, then we are the winners.

For nothing but  your actual physical presence there, can let you experience the struggle and passion that has gone into the making of this iconic Pallava city and great legends and sad battles that speak volumes about the people behind it.

(The writer is a journalist and the wife of K Srinivasan, Assistant Commissioner — GST)

Stay up to date on all the latest Chennai news with The New Indian Express App. Download now
(Get the news that matters from New Indian Express on WhatsApp. Click this link and hit 'Click to Subscribe'. Follow the instructions after that.)
TAGS
Mahabalipuram