The verdict could give rise to a number of legal reforms that have not been discussed in it like marriage and divorce, adoption and guardianship, bank loans and inheritance.

CHENNAI: So how many LGBTIQ (Lesbian, Gay, Bisexual, Trans, Intersex and Queer) persons you know are going to come out of the closet now that their sexual rights have been recognised?” A friend called me up to ask as soon as the Supreme Court’s verdict on Section 377 of the IPC was delivered. “No one,” I responded as I allowed the weight of those words to sink in, slightly chipping away the celebratory mood I was in.

There is no doubt that the reading down of the archaic law, by a bench of SC that has decriminalised homosexuality and concluded that sex among consenting adults is not an offence, is a huge victory to a decade-long struggle. But as the verdict points out, this legal win is only the beginning of the process that enables sexual minorities to enjoy full citizenship, and it’s here that my response is rooted. 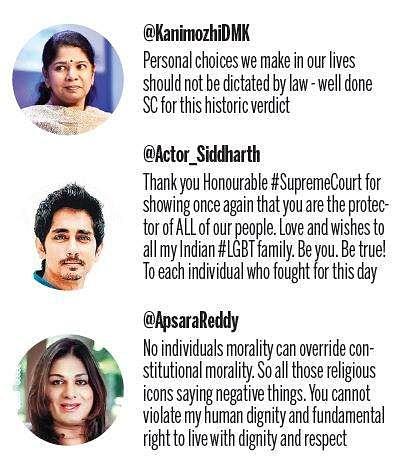 This revised law will help keep non-heterosexual individuals out of jail, and as with all laws that guarantee the protection of fundamental rights for citizens irrespective of their identity, will allow for legal recourse if violated. The SC verdict will still not serve as a deterrent to discrimination experienced by sexual minorities, and is only the start to the herculean journey of queer persons finding acceptance in a society that ranks high in ridicule and homophobia. So no, queer persons will not come out of the closet till families accept, health providers care, institutions include, employers evolve, landlords let and no one ostracises. In that, the battle to normalise queerness is a tougher, long-drawn one that follows the first step of the legal battle to recognise queer rights.

This judgement concludes that, “The provisions of Section 377 will continue to govern non-consensual sexual acts against adults, all acts of carnal intercourse against minors, and acts of beastiality” while stating that “… insofar as Section 377 criminalises consensual sexual acts of adults (i.e. persons above the age of 18 years who are competent to consent) in private, is violative of Articles 14, 15, 19, and 21 of the Constitution. It is, however, clarified that such consent must be free consent, which is completely voluntary in nature, and devoid of any duress or coercion.” The verdict could give rise to a number of legal reforms that have not been discussed in it like marriage and divorce, adoption and guardianship, bank loans and inheritance.

A public debate on the aforementioned in the case of queer couples may fuel a discussion on the very ideas of family, parenthood, partnership, abuse and rape giving rise to a fight against heteronormativity in scripture and society, preaching and practice. What we have with us today is a powerful law, rich with possibilities for a future in which both love and the freedom to love exist. But in a time when laws are being reduced and rights activists need defending, where dissent is frowned upon and the face of the lynch mob is growing larger, a progressive judgement such as this can reach its fullest potential only if the leg work to both protect it from dilution and place it alongside laws that govern other minorities is done.

"‘Let us move from darkness to light, from bigotry to tolerance and from the winter of mere survival to the spring of life as the herald of a New India to a more inclusive society" says the judgement, and what it has done is only set us on the path toward this goal. (The writer is a columnist with The New Indian Express)

Stay up to date on all the latest Chennai news with The New Indian Express App. Download now
TAGS
LGBTQ

Singer Shaan to come up with a song on 'coronavirus warriors'