The biggest boardgaming convention in the world is called Spiel, and it takes place in Essen, Germany every October.

CHENNAI: The biggest boardgaming convention in the world is called Spiel, and it takes place in Essen, Germany every October. Spiel is invariably celebrated with a host of exciting new releases and announcements; given that this is one of the most awaited gaming events, here’s a list of new games to watch out for! Richard Breese, the man behind a whole host of ‘Key’ games including the acclaimed Keyflower, is releasing Key Flow at Essen this year. As elevator pitches go, Key Flow has one of the best ones I’ve heard - it’s Keyflower mixed with 7 Wonders. Potential goldmine, right there.

Okay, the name’s a bit of a stretch but a two-player game (based on last year’s excellent Dinosaur Island) where each of you are building competing Jurassic Parks? You probably already know whether you’re going to like this one or not.

Treasure Island’s premise is as ridiculous as it is hilarious - Long John Silver’s been tied up by his mutinous crew, who keep questioning him about the location of his buried treasure. He can lie every now and then, but he also must tell the truth often enough that one of the mutineers might be able to find it - in which case they win. However, if he’s able to free himself before anyone else finds it, then he wins.

Firenze originally came out in 2010, but went out of print shortly afterwards; only to be resurrected this year in a lovely new edition from Quined Games. You’re building towers in Renaissance Italy using 3D wooden pieces, which really elevates the game.

Reykholt
Uwe Rosenberg’s big release for 2018, Reykholt’s gotten some good buzz lately. It certainly scores some points for its theme - Icelandic farmers using geothermal energy to grow crops - but can it take its place in the library of excellent Rosenberg games? 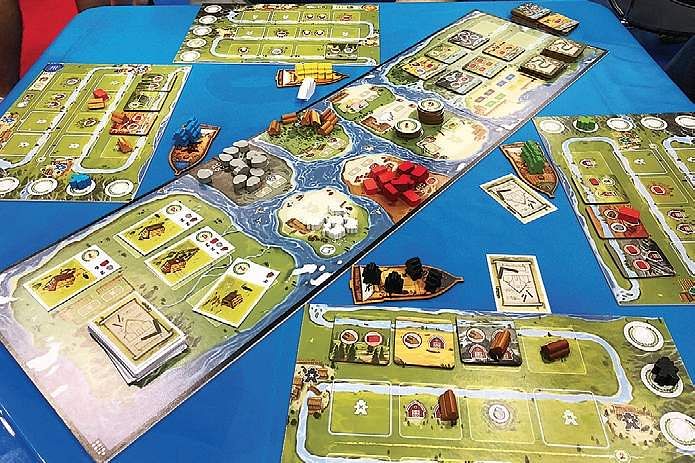 Forum Trajanum
Of course, there are other celebrated boardgame designers out there, one of whom is Stefan Feld, who’s designed the wonderful Castles of Burgundy among many other games. Forum Trajanum is the big Feld release of the year, and early opinions are comparing it to his Burgundian magnum opus - and that’s enough to get me interested.

Days of Wonder only put out one game a year, ostensibly to focus on ensuring that each game is as polished and high-quality as possible. It also has the secondary effect of guaranteeing keen interest in said annual release even when, as with The River, we don’t know much about it yet.

Coimbra
If I could get one game from Essen, Coimbra would be it. It’s a dice-drafting game with multiple paths to victory and a lot to think about, and it also looks very pretty indeed.