Fifteen-year old Vignesh was on his way to college when he hailed a share auto.

CHENNAI: Fifteen-year old Vignesh was on his way to college when he hailed a share auto. The auto driver requested him to sit in the front to make room at the back for the older female passenger. For the next 15 minutes from Tambaram railway station to Bharat Engineering College, Vignesh clung onto the auto’s frame and tucked his knee whenever another vehicle swerved in
too close. 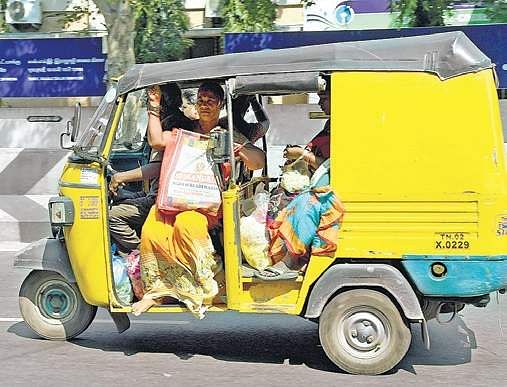 According to the Tamil Nadu Motor Vehicle Rules, transporting people, animals or things in the driver’s seat which would prevent him from controlling the vehicle, and having proper vision of the road is a violation.

But, share autos across the city and its suburbs blatantly overload their vehicles and make passengers occupy the front seats. Share autos are mandated to transport four passengers but as many as nine passengers are loaded into the auto, where sometimes two passengers share the driver’s seat.
Auto unions claimed that drivers have been instructed not to overload. However, Express found most share autos plying in the IT corridor carrying more than five passengers.

“Drivers have slowly stopped carrying two rows of passengers in the back after instructions and police crackdowns. They have also been instructed to stop carrying passengers in the front seat,” said S Balasubramanian, general secretary of the CITU auto drivers union.

But the auto drivers blame passengers saying that they willingly occupy the front seat instead of waiting for the next auto. “Even if we tell them the auto is full, they sit in the front with us,” said a share auto driver operating on OMR, explaining that the police demand bribes whether or not they violate norms.

Overloading of schoolchildren is rampant. The Madras High Court in 2015 had mandated that auto drivers can transport up to three children above the age of 12 and five children below 12 years in their autos. But, schoolchildren are often made to sit on the sidebars and on each others’ laps.

The High Court directed the respective road transport officers to take action against drivers violating these instructions. But, drivers claim that these checks happen only when schools reopen for the academic year in June. “A few cases are booked and then it is business as usual for us,” said a driver, who mostly drives
in Tambaram.