Jyotishmati oil: The ‘elixir of life’

According to Ron Kurtus, “Intellect is the ability to learn and reason, as well as the capacity for knowledge and understanding.

CHENNAI: According to Ron Kurtus, “Intellect is the ability to learn and reason, as well as the capacity for knowledge and understanding. It is intelligence and using your mind creatively”. Though intellect is considered as congenital, it is also believed that it can be promoted. The Indian system of medicine prescribes  many such intellect promoters for leading a successful life. 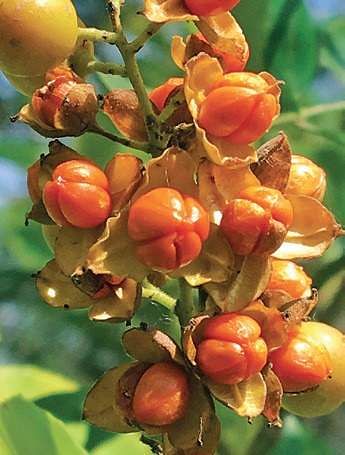 The prime drug among these is ‘Jyotishmati’, meaning luminous or glowing brain. The oil extracted from the seeds is applied on the scalp or administered orally as drops. This oil is known as ‘elixir of life’ and given to two-three-year-old children to old-age people. Powdered seeds are also given orally, 10 mg for children and 500 mg for adults, but are avoided in case of pregnancy.

Jyotishmati is known as Clesatrus paniculatus Willd. Scientifically, it belongs to the family Celastraceae. Malkangani, Malkungi in Hindi, Bhavanga beeja in Kannada and Valulavam and Valuluvai are called in Malayalam and Tamil respectively. Jyotishmati is a dioecious plant as in the case of well-known Giloy climber, which means, male and female flowers are produced in separate plants.

It is an extensive climbing shrub. Branchlets lenticellate are prominently dotted. Leaves are alternate, 4 to 16 cm long and 3 to 12 cm broad, ovate to elliptic-ovate, margins crenate-serrate, smooth on either sides. Inflorescences are terminal panicles which are 10 to 18 cm long, many-flowered. Flowers are small, pale-green. Fruits are dehiscing capsules c 1 cm long, ellipsoid, green, and turn orange when ripe. Seeds are 6, c 5 mm long, ellipsoid, enclosed by bright red aril.

Bark, leaves and seeds are reported to have medicinal properties, used against asthma, paralysis, chronic bronchial conditions, leprosy, leaucoderma, fever and also as antidote for opium poisoning. However, these should only be consumed after consulting a doctor. In India, it is found to grow in deciduous forests of almost all the states.

The IUCN Red List Status of this species has been assessed as “vulnerable” for Kerala and “lower risk-near threatened” for Karnataka and Tamil Nadu.