Scandals and stories set in stone

CHENNAI: Chennai houses thousands of statues of political, literary and religious significance. Some have stood the test of time while some caked with dirt, dust and crow poop have become silent soldiers of the past. In a talk hosted as part of Madras Week celebrations, historian-author Venkatesh Ramakrishnan highlighted towering colonial and post-colonial statues that are laced with easter eggs and contemporary history. 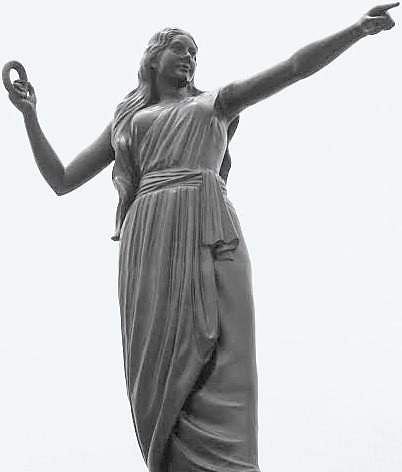 “People aren’t born with the thought that a statue will be built for them,” he said, as we prepared to immerse ourselves in the 60-minute talk.
In 1965, the anti-Hindi agitations saw a surge of student power across Tamil Nadu. Army units were called to control the riot. “Rajendran, a student leader, was also part of the riot. He was shot during the agitation and was later honoured with a statue in the Annamalai University in Chidambaram. His sister along with her family pay respect to his statue on the day of his passing, every year. He wouldn’t have expected to die nor to have a statue,” he shared.

Take a quick look at the city’s history and it’s safe to say that these sculptures stir emotions. For instance, the statue of former chief minister M Karunanidhi which was installed in 1975 at the entrance of General Patters Road was demolished during the violence following the death of his worthy rival, actor-turned-politician MG Ramachandran. “When Periyar EV Ramasamy wanted to build a statue for him, Karunanidhi refused to accept it. He said he would consider it after the DMK installed Periyar’s statue,” he said. After Periyar’s death, his statue was installed before the Simpsons building on Anna Salai, followed by the DMK Patriarch’s.

Colonial statues including that of former Governor-General of India Charles Cornwallis, Major-General Thomas Monroe, Colonel James George Smith Neil, Queen Victoria, and Lord Willingdon have also played an important role in the city’s history.
The statue depicting Willingdon with one arm on his hip was once near the Gymkhana Club. It was

installed in 1930 and stayed for 20-odd years till the centenary of the Sepoy Mutiny in 1957. “Right-wing groups across India defaced colonial statues and it was rumoured that there was a bombing conspiracy to shatter British statues in Madras, especially that of Willingdon,” he said.
In a preventive action, a day before the anniversary of Indian Independence, then chief minister Kamaraj ordered the statue to be taken to Fort Museum. The pedestal stood empty for years until Kamaraj’s statue was placed on Willingdon’s podium. It was unveiled by Jawaharlal Nehru in 1961. “Kamaraj was the first chief minister to allow a statue to be unveiled for himself, “ he said.

The statues of Justice Party founders Natesa Mudaliyar, Sir PT Theyagaraya Chetty and TM Nair still stand tall in T Nagar, an area named after its founder. “The Justice Party was the earliest party to give women votes and it was under their term the first mid-day meal scheme was introduced. Substantial improvement in education was also observed during their time,” he shared.

While several statues dot the Marina beach stretch, one statue has always been a structure of interest — the famous Kannagi statue. “Jayalalithaa, a staunch believer of vasthu, was convinced that the Queen Mary’s space along the promenade was a suitable place for the secretariat. But there was one impediment. The astrologers had told her that it would bring bad luck to the ruler of the state. Conveniently, a truck rammed into the pedestal of the statue of Kannagi, it was cordoned off by the PWD and taken to the Government Museum,” said Venkatesh.

More from Chennai
Now we are on Telegram too. Follow us for updates