Two men allegedly diverted the attention of the staff at a money exchange centre at Thousand Lights and escaped with cash were arrested.

CHENNAI : Two men allegedly diverted the attention of the staff at a money exchange centre at Thousand Lights and escaped with cash were arrested. Hunt is on for another person.On Wednesday, the duo stole Rs 35,000 from the money exchange centre. The owner circulated CCTV footage of the men stealing among his circle of friends. This led to the arrest of the two on Saturday. Police identified them as Ameer Ali (35) and Mohsen Elyasi (34) of Iran and the absconding as Jason. 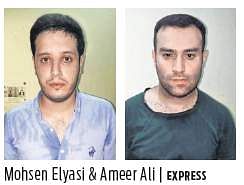 Police said the trio reached Delhi on July 7 and boarded a train to Chennai. The two men visited a money exchange centre at Guwahati Tours and Travels on Gulam Abbas Alikhan ninth street at Thousand Lights of Jain Shah. “The duo had said that they wanted to exchange Dubai currency. After they left, the owner found `35,000 missing,” said a police officer. Police registered a case and retrieved the CCTV footage. Meanwhile Shah also circulated the video to other forex firms and tour operators.

“On Saturday, the three visited another centre and were claiming to exchange American and Singapore currency. The owner of the shop identified the persons through the CCTV footage and alerted police. While one of them managed to escape, the staff nabbed the other two,” said a police officer.

Explaining the modus operandi, Assistant Commissioner Muthuvelpandi said the trio would approach outlets as if they need to exchange 100 US or Singapore dollars. “As they would be talking, one of them would get the cash from the staff on the pretext of checking for genuineness and pocket some. They would then demand a huge sum for exchange and leave without exchanging the dollars,” the official said.