CHENNAI: Leaky roofs, broken water stations and defunct e-toilets — this is the current condition of the recently ‘upgraded’ Besant Nagar beach.The Greater Chennai Corporation recently installed wide concrete tracks, first aid and drinking water kiosks and e-toilets among other facilities, under the Government of India’s Swadesh Darshan scheme for tourist destinations. About `11 crore was allocated for the Swadesh Darshan project in Chennai. However, the absymal condition tells a different story.

The first aid kiosk is infested with rats. Taps at the water stations are broken. The washrooms are always locked and frequented by anti-social elements.“I suffered a minor electric shock during the recent rains as the roof was leaking and water entered inside the power socket. When I complained about it, the officials asked me to use a scale to operate the switches, instead of repairing the roof. Also, the stretcher is rusted due to the seeping roof and the place is infested with rats,” said the woman in-charge of the first-aid kiosk.
Apart from this, lights and air-conditioner are not functional inside the kiosk. As  part of the project, the civic body also constructed two water stations with five taps each. While one kiosk is in good condition, the taps in the other are broken. 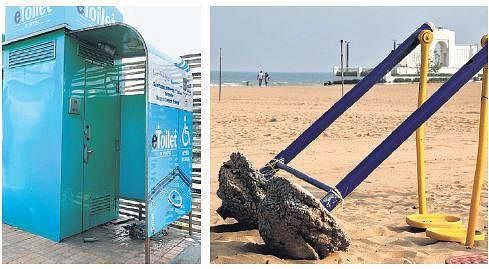 “The residents of Kuppam break the taps during the night. They also get huge cans to fill the water during the afternoon when there are no visitors, emptying the tank. For the last three months, there was enough water for only 15 days,” said T Rajesh, a resident of Besant Nagar.Also, the civic body installed four e-toilets opposite the Governor’s bungalow and never opened them. The handles of the washrooms have already been broken by miscreants and visitors say that anti-social elements frequent the place in the night.
Other amenities, part of the project like concrete tracks and play equipment have also been broken due to ill-maintenance.

It may be recalled that the civic body constructed these amenities despite much opposition from the residents of the area.“The fragile sandy coastal eco-system has already been partly destroyed by implementing the project. What is worse is that the civic body did not care to maintain the amenities. As anticipated, the situation has just gone from bad to worse,” said Ramakrishnan, another resident of Besant Nagar.When contacted, an official said they will take up restoration works soon and did not wish to comment on the maintenance of these amenities.

Now we are on Telegram too. Follow us for updates
TAGS
Besant Nagar beach Greater Chennai Corporation