In October, a 23-year-old jumped in front of a train in Vyasarpadi, allegedly because he was trolled online for dressing up as a woman for one of his TikTok videos.

CHENNAI: With no regulating mechanism in place, the ‘TikTok’ app (formerly musical.ly) that has recently caught the imagination of the young and the old worldwide may just be a ticking time bomb, fear experts. The app lets its users post 15-second videos of anything right from ‘brushing your teeth at 7:45 am’, according to the application’s app store description. While it may make a celebrity out of the unlikeliest of people, it also exposes children and adults to a wide range of risks.

In December alone, a counsellor at the 104 helplines said that he had received 36 calls from children and adults in Tamil Nadu dealing with TikTok-related bullying, harassment and for displaying symptoms of the onset of addiction. Explaining a case he recently encountered, B Elayaraja, a counselling psychologist said a girl in class 11 who was recently sent to boarding school, borrowed a friend’s phone to first make a TikTok video.

“Her first video was shared among classmates and they heaped praises on her. From there, she would aggressively upload several videos a day — editing and re-editing until she thought it was perfect. She stopped talking to her mother and sister and would create multiple accounts for fear of having her sister delete her account,” he said. “She was good at volleyball which she gave up and her grades also dropped. We started treatment by convincing her to reduce the hours of usage, especially an hour before it was time for her to sleep. This, along with awareness of the kind of risks she was exposing herself to, helped us put her back on track,” he added. 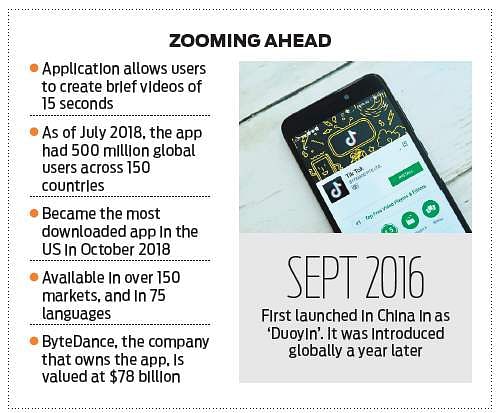 In October, a 23-year-old jumped in front of a train in Vyasarpadi, allegedly because he was trolled online for dressing up as a woman for one of his TikTok videos. “I first started using the app out of curiosity to see how many likes my videos can garner. And I’ve been on it ever since because all my friends are on the app and it’s a good way to kill time,” said Revathi S, a 25-year-old IT professional.

The app has already surpassed 100 million downloads on the Google Play Store. However, it has drawn flak from various quarters for its allegedly poor security and for taking up responsibility only as a reactionary response. For instance, after the app was banned in Indonesia for containing videos that had a negative impact on youth, the app sanitised its content which later led to an overturn of the ban.

Similarly, the app originally had just two options for content control — to share the videos to everyone on the network or to be seen only by the user. After similar backlash, new security features that allowed content to be shared with friends were rolled out. The app’s effect on children need to be specially considered in the discussion of formulating a regulatory mechanism, said experts. Senior Psychiatrist Lakshmi Vijayakumar, the founder of Sneha suicide prevention helpline, said that among children, one-third of all bullying happened online, and most of those bullied online were suicidal.

Meanwhile, the app does not attempt to hide its security flaws. The app’s privacy policy states, “We share your data with our third party service providers we rely on to help you provide you with the platform. These providers include cloud storage providers and other IT service providers. We also share your information with our business partners, advertisers, analytics and search engine providers.” The app also states that it is intended for users aged 13 and above.

Students in the app are often seen in school uniforms while posting videos of themselves from the classrooms, giving away information of their whereabouts to potential stalkers who are able to guess the schools they go to. While the app has an option to report a profile, none of the six accounts that were reported for having obscene content and featuring users seemingly less than 13 years of age, were taken down until the time of publication of this article.

Another unquestioned giveaway is the data, that is served on a silver platter to Chinese app makers like Tiktok’s ByteDance. “If at all China wants demographic data from ByteDance’s userbase, it will perhaps be able to pull out more data than the Indian Government itself. This is not often considered a threat by local policy makers but the truth is that they will have data relating to your height, weight and even how many users wear spectacles,” said Moses Sam Paul, head of growth, Heptagon Technologies.

The difference between US-based and Indian app makers and their Chinese counterparts is that while the former think of ‘moats’ (a business’s ability to maintain competitive advantages over rivals) first when they develop an app, the latter focuses on scalability. “They first capture the market at a low cost and don’t spend too much time pondering over the impacts of the app,” said Moses.