With erratic rainfall patterns becoming the new normal and Chennai’s groundwater having been exploited to dangerous depths, is there a long-term solution to the almost perennial crisis?

CHENNAI: Chennai’s water woes are legendary. That 2019 too marks another year of crisis is sadly little cause for surprise. The Northeast Monsoon failed in 2018. There is only enough water in the city’s reservoirs to meet drinking water needs for the next five months. With erratic rainfall patterns becoming the new normal and Chennai’s groundwater having been exploited to dangerous depths, is there a long-term solution to the almost perennial crisis?

The answer is yes, if a recent study by researchers from Anna University’s Geology department is anything to go by. According to ‘Predicting future water supply-demand gap with a new reservoir, desalination plant and waste water reuse by water evaluation and planning model for Chennai Mega City’ published in Elsevier’s Groundwater for Sustainable Development in October 2018, the recycling and reusing of sewage is one of the most reliable and eco-friendly solutions for Chennai. 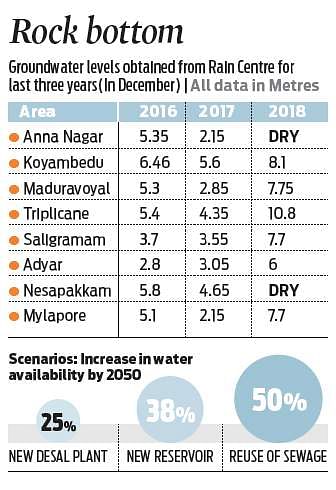 The Water Evaluation and Planning Model, a software developed by Stockholm Environment Institute, was used to analyse the new supply sources the city has planned and the projected population growth up to 2050. It found Chennai could become water-surplus by next year if it recycled the sewage it generates. In fact, up to 50 per cent of the water needs projected for 2050 could be met this way.
The city’s water needs are currently met by four major reservoirs in its outskirts and two tanks — Cauvery water from Veeranam Tank in Cuddalore district and Krishna water from Kandeluru Reservoir in Andhra Pradesh.

The other sources are two desalination plants with a capacity of 200 Million Litres Per Day (MLD), extraction of groundwater by the Metrowater Board from Araniyar-Kosathalaiyar Basin and a small quantum of treated sewage water supplied to industries. The total capacity of all these sources put together is an average 800 MLD, which falls in summer.

A new reservoir is being constructed at Tiruvallur district by joining Kannakottai and Thervoy Kandigai lakes and a new 400 MLD desalination plant is coming up at Perur in Kancheepuram district. Aside from these, the researchers propose recycling of sewage water as the third source of water to meet the city’s needs.

The model predicts that without new sources, by 2030, the gap between supply and demand will be almost twice what it was in 2016. “The demand would increase by 20 MLD a year, but the supply cannot increase beyond 800 MLD. Only 60-70 per cent of the demand can be met during summers in such a scenario,” explained L Elango, one of the two authors of the study.
The researchers considered the new three water sources independently. Of the three, recycling of sewage was the most promising option as it is projected to increase the water supply by 50 per cent. The new reservoir would increase supply by 38 per cent and the desalination plant by 25 per cent.

Desalination plants do not depend on rainfall. However, there is a huge environmental cost: sea erosion, increase in salinity of water table, and disappearance of sand dunes. Ecologists have seen these effects around the Sulerikattukuppam village near the Nemmeli desalination plant. “From one litre of salt water, half a litre of fresh water can be extracted. But the effluent will have an increased salt content of 70,000 mg which might disrupt the aquatic life around the plant,” added Elango.

The new reservoir is safe on the ecological front but is vulnerable to inter-state politics. It is heavily dependent on Krishna River water released by Andhra Pradesh from the Kandaleru reservoir. The reservoir, coming up 60km from the city, has a capacity of one thousand million cubic feet. “In 2030, around 80 per cent of the water demands will be met with this added source. But this source is susceptible to political and social ups and downs as the state is dependent on Andhra Pradesh,” noted the study. Water Resource Department officials told Express only 30 per cent of work was pending and the reservoir would be ready to store water in June.

Considering reliability, preservation of environment and recharge of groundwater, recycled sewage would help the city be self-reliant in the long run. “It is possible to treat 60 per cent of wastewater, which can be used for cleaning, washing and toilet flushing purposes. This way the city will get a supply of an additional 486 MLD of water suitable for reuse. This will also help in the effective recharge of the water table,” said the study.

Metrowater’s data says the city generates only 550 MLD of sewage. But studies by various activist groups and academics estimate around 1500 MLD of sewage is generated in the city. The average of 830 MLD supplied by Metrowater only accounts for 34 per cent of consumption. Residents use other sources such as bore wells and private water tankers making the total requirement around 2000-2400 MLD. Researchers said even if 80 per cent of this became sewage, it would amount to 1500-2000 MLD of wastewater, which can be reused. The study noted that treated water reuse is an independent and self-reliant water source.

The state government is only now taking baby steps in this direction. It recently allocated `86 crores to set-up 500MLD sewage treatment plants. Officials said the aim is to release the treated water into water bodies so the groundwater would be recharged. “Two days ago, we opened bids for the construction of two 10 MLD tertiary treatment plants, one at Nesapakkam and one at Perungudi. This was mainly done to rejuvenate groundwater sources,” said a senior metro water official. Two more reverse osmosis plants of 60 MLD capacity each, at Kodungaiyur and Koyambedu, are expected to function from June 2019. These plants will mainly cater to industries.

Stay up to date on all the latest Chennai news with The New Indian Express App. Download now
TAGS
Recycling water