While tankers are known to dump sewage into the marshland under cover of darkness in the wee hours, forest officials claimed that dumping of paint effluent is a first. Paint sludge is known to contain high levels of mercury, lead and chromium which are lethal to birds on prolonged exposure. The enhanced respiratory system of birds such as pelicans, herons and other waders make them extremely vulnerable to these pollutants.

Further, the effluent is insoluble in water. This means the heavy metal-laced effluent continues to remain potent. “A few months back, a tanker emptied paint effluent in our sewage treatment plant silently and left. The sludge and red colour remained on the surface for the entire cycle,” said a Metrowater official in Perungudi sewage treatment plant nearby, explaining that cleaning the effluent from the swamp would be extremely difficult. 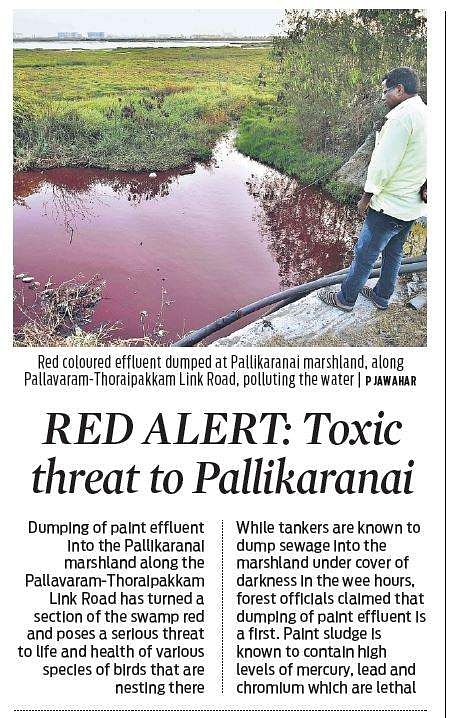 Officials in Chennai Corporation’s landfill nearby claim that tankers emptying their contents into the marshland is an everyday affair. “Tankers just need less than five minutes to empty their contents. This makes it extremely difficult to catch them in the act,” said a landfill supervisor.

Both Metrowater and corporation officials said they don’t question these tankers fearing violent repercussions. A security guard who questioned the tanker lorries for dumping sewage into the marshland while committing the act was beaten badly, the supervisor said.

The place where the paint effluent has been dumped is metres away from a point where police catch motorists for violations during the day. However, police presence is limited to patrols at night. “Our main concern in this stretch is prostitution, so we chase away tankers as a preventive measure,” said a police officer.

When contacted,  forest department officials promised immediate action. “I will check this issue and take action immediately against the perpetrators,” said a senior forest official under whose jurisdiction the marshland falls under.

Now we are on Telegram too. Follow us for updates
TAGS
Pallikaranai marshland Pallikaranai birds mercury Paint sludge