Is India ready to say ‘ai’?

Artificial Intelligence and robotics are fast transforming healthcare and caregiving in the West, but
experts & patients say Indians prefer the human touch over robotic intervention

CHENNAI: The power of Artificial Intelligence is reverberating across industries. A quick Google search would yield results that indicate how this technology is revolutionising the healthcare industry — from drug development to clinical research. In July 2019, Dr Bhaskar Ramamurthi, director, IIT Madras, said that while robotic surgery was important, there was another aspect that was often ignored when it came to healthcare — caregiving. Emphasising the lack of human touch, he asserted that there is tremendous scope for start-ups in this sphere — to create robots that could replicate the tenderness of the human touch.

“We are heading towards what looks like a fairly big crisis when it comes to the availability of manpower. As people get older, they want to be around people who love them and that is getting harder for people to do due to various constraints. Assisted technologies and robotic technologies will have to come into play. And this is much harder to develop than robotic surgery as it is very difficult to replicate what human touch and interaction provide. Even something like holding an elderly person’s hand firmly is something that can be extremely complex to get a machine to do,” said Dr Ramamurthi.
Sceptic about change 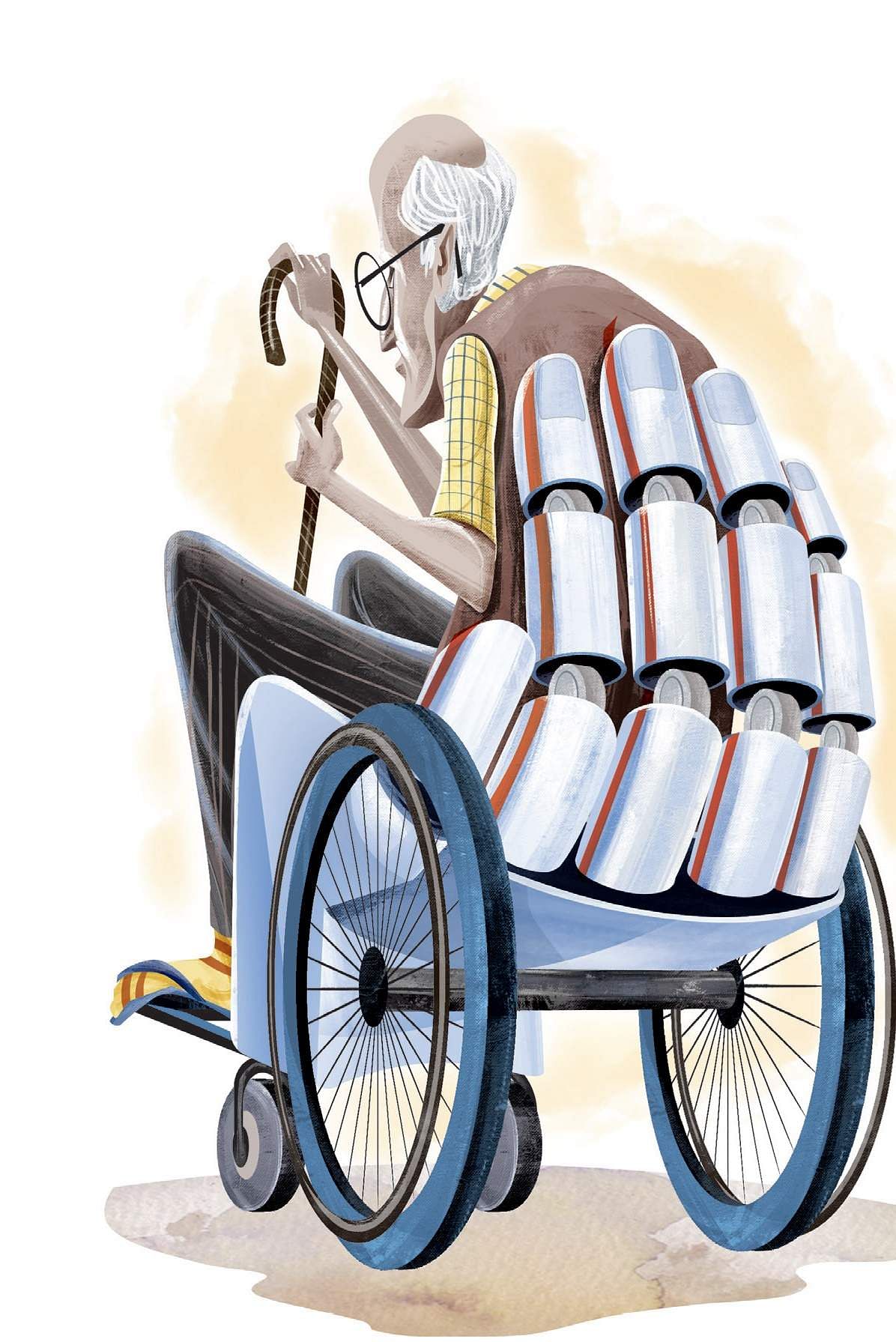 While this is becoming a reality especially in countries like Japan, which has a large ageing population, those specialising in geriatric care believe it will take some time for India to catch up and warm up to the idea of having a robot as a caregiver. However, Dr VS Natarajan, who is considered the Father of Indian Geriatrics and the founder & chairman of the Dr VS Natarajan Geriatric Foundation says, “While machines can fulfil daily requirements, I am sceptical about whether they can provide the care and empathy that geriatric patients require.”

“A robot can touch the body, but I do not see it as capable of expressing or interpreting feelings. I would think that paid caregivers would be a better alternative to robots. I’m also of the opinion that robots might be costlier than human caregivers. I don’t see too many elderly people in India being comfortable having a robot as their primary caregiver. I think that is a long way off because the elderly are extremely wary of change,” he said. In the current scenario though, he said, paid caregivers will be in huge demand as the elderly population is steadily on the rise.

While India is still opening up to the idea of a robot caregiver, according to a 2015 Wall Street Journal report, Japan developed a new experimental nursing care robot, ROBEAR, which is capable of performing tasks such as lifting a patient from a bed into a wheelchair or providing assistance to a patient who is able to stand up but requires help to do so.

This robot, developed by the RIKEN-SRK Collaboration Center for Human-Interactive Robot Research in Nagoya, was a successor to RIBA, which was announced in 2009, and RIBA-II, which was developed in 2011.

Families preferred
But the challenges in India are also strained by the nuclear family set-up. “Properly trained caregivers are the need of the hour. With the joint family system disintegrating and a number of elderly people living on their own and requiring care in their own homes, there is no alternative for them other than paid caregivers.

However, it is important to ensure that a proper background check is done to ensure that there is no elder abuse. This is seen especially in the case of dementia patients where there have been instances where the caregivers have slapped the patients because they have had to repeat the same thing multiple times and they know that these patients are incapable of complaining to their family members.”
Consider the case of N Ganesh, who underwent a hip replacement surgery last year. The post-surgery complications were many — from bending over to wear his socks to having a bath, he was unable to perform any of these tasks on his own. His wife, who suffers from chronic arthritis, too could not help as his frame is lofty and she did not have the strength to lift him.

“We had to get a nurse from the hospital to help us out initially after which we got a paid caregiver who would stay with us through the day,” he said. “It took some time to get used to it and I remember being very hesitant, initially, as I would have preferred having my children care for me. Unfortunately, they are in the US and I didn’t want to burden them when this was a more convenient option for everyone. It takes some time to get used to but once you’re okay with making the caregiver a part of your family, it gets a lot easier.”

But having his son by his side would have perhaps made a big difference, he says. Children too feel guilty of not being around their parents, especially in times of need. It is with this impression that many urge their parents to either move in with them in a foreign country or ask them to take up a living space in an assisted living set-up.

“I cannot leave my job in Dubai because that is what keeps my home running,” said R Mohanan. “My parents are old and are living on their own in Chennai. I have told them so many times to leave and stay with me in Dubai where they will have all the comforts, but they refuse to leave.
Despite the nuclear set-up accompanied by the problem of finding appropriate help, they feel at home in T Nagar as they have lived there for over 20 years. They have a great relationship with people in the neighbourhood. They say they want to die in that house.” While Mohanan’s parents are still hesitant, many consider the idea of an assisted living space as a convenient and viable option.

Nurses’ frets
Caregivers on their part feel that the biggest issue with elderly care is that often they are made to do much more than just look after the aged person.
“I have been asked to cook and put out the clothes and all of that. They often mistake me for being a house-help whereas I am a trained nurse. So I find it quite insulting to be treated like that. People do not realise that it is a tough job. They are so set in their ways and refuse to budge. Even the pay for the hours we put in is menial. While I feel I am doing a service, I just wish I got a little more respect for it,” says a caregiver who works for a leading organisation.

“The demand is high and is only increasing for assisted living spaces,” said Kavya Krishna, CEO of the two-year-old Athulya Assisted Living which has three outlets in the city. The concept and knowledge are increasing and as there are not many players in the market, they have the first-mover advantage. “While retirement homes were being heavily promoted by real estate companies, the affordability factor was a major drawback. Assisted living is a growing and niche market but requires a lot more awareness.

When we talk of assisted living, it means that any and everything that an elderly person requires is provided to them without them having to worry or go out of their way for anything,” she said. Living in an assisted caregiving set-up includes all their meals, which are tailormade to suit their dietary requirements, clinical care, nursing attendants at all times, someone to run day-to-day errands, a nutritionist, physiotherapist, first-level emergency care, comprehensive care, engagement and social activities in addition to having an entire facility that is senior citizen-friendly in the way that it is designed and providing a safe environment where children too are stress-free.

“We currently have three facilities and the prices vary from `40,000 to `50,000 depending on the infrastructure and the facilities provided,” she said. “Payment is monthly and the only thing that they have to pay for as an extra is their consumables and medication. We currently have 45 people in two centres and are expecting to expand to 100 people in a few months in the three centres. We also have the option of short stays where elderly people come in for a few days or weeks and have also introduced a daycare, which is gaining a lot of traction.”

A Sociology professor, associated with a well-known college in the city, says, “With the disintegration of the joint family system and with people migrating to different cities and countries in search of better prospects, caring for the elderly is a responsibility that not many are willing to take up or in a position to take up,” says “I do not see robotic caregiving as something that will catch on easily in India as people are hesitant about making the switch from family caregiving to paid caregiving. Many elderly people crave love and affection from the family and I’m doubtful about whether they will feel the same compassion and care from a robot.”