Every morning D Arul Raj wakes up with one goal — to rescue at least one homeless person and put a roof over his/her head.

CHENNAI: Every morning D Arul Raj wakes up with one goal — to rescue at least one homeless person and put a roof over his/her head. He drives his autorickshaw, picking up savaaris for four hours each in the morning and evening, and the rest of the day he goes around the city to look out for homeless people who need help. Arul founded the Karunai Ullangal Trust two years ago to help abandoned people. So far, he has rescued more than 320 people.

On Tuesday, when we were waiting to talk to Arul, he gets a call telling there is someone in Perambur who needs his help. The 34-year-old autorickshaw driver doesn’t think twice before getting into his vehicle, asking us to hop on and zooming past the city.

How it all began

“I have a wife and two children. Till 2015, I had no intention of doing social service. During the floods that year, my wife received an emergency call from one of her friends at Saidapet. He told her that they were starving and were unable to get out of the locality due to stagnation. I brought food to their place only to realise there were hundreds who needed help,” he says.

Using a pushcart, Arul ferried people out of the area. That’s when he first felt the need to help a fellow human being. “It was the amount of trust they had on me that shook me. I then joined a Facebook page and a WhatsApp group called Makkal Ku Udhavalam, created especially to help people during floods. Requests for help kept pouring in and I did what I could,” he says.

Arul was then working in the collection department of a private bank. He would go from house to house to collect bank dues. However, when the office management realised he was busy with social service for the most part of the day, they fired him in 2016. Arul was jobless for six months. “We worked for six months after the floods on cleaning and providing relief materials. After six months, when the admin of Makkal Ku Udhavalam decided to delete the page, I decided to manage it and changed the name to Karunai Ullangal. Simultaneously, that was when I lost my job,” he says.

From helping cancer patients to poor children getting scholarships, Arul did everything he could. One day, towards the end of 2016, a woman on the roadside in Saidapet asked him if he could help her join a shelter home.

“I did not even know what a shelter home was until then. Earlier too, during floods, a woman had asked me the same, but I could not help her. But this request made me take the step to rescue the homeless and this changed my life forever,” says Arul. In January 2017, he received a call saying an injured homeless man was lying by the roadside and that he might die if they don’t help him soon. “This time, I took help from different NGOs and enrolled him in a private shelter home at Porur at 1.30 am. When that sense of satisfaction kicked in, I decided this is what Karunai Ullangal Trust will do from then on — rescue homeless and enrol them in a home.”

For each rescue, the fuel costs alone comes up to Rs 500. When Arul did not have a job, his friends and volunteers stepped up. “Each month, we were doing about 10 rescues and I did not want to depend on them forever. So, I bought an autorickshaw in 2017. A dear friend of mine gave me Rs 90,000 and the rest of the amount, I am paying through installments every month,” says Arul. 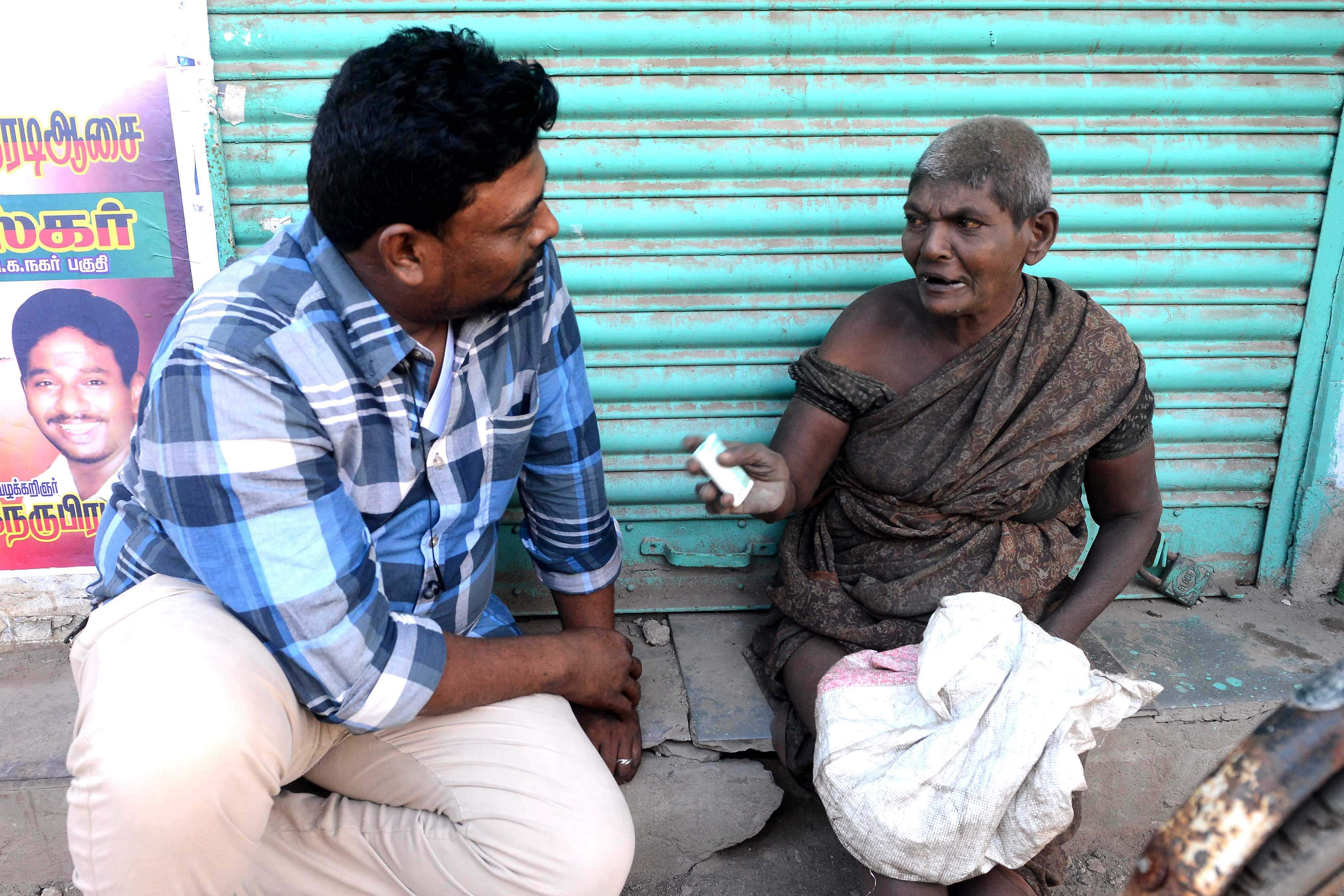 From then till now, Arul’s daily schedule has been the same. Ride the autorickshaw from 6 am to 10 am, carry out rescues from 10 am to 6 pm and again ride the autorickshaw from 6 pm to 10 pm before he heads home to spend time with his family. Of the people they have rescued, 120 have been reunited with their family, while others are in different shelter homes across the city. Now, Arul funds most of the rescues himself.

While carrying out the rescues, Arul says he found some incidents alarming. “One day in 2018, I saw a distressed man on the roadside in Tambaram with a shabby long beard, torn clothes and his face covered in a thick layer of dirt. Talking to him, I found out that he was a film director who took to the roads after his wife divorced him and kids did not support him,” says Arul.

It is often common issues that lead to situations like this, he says. “Next time you find a distressed person, talk to them. Most of them have homes, but they don’t go because there are no loving people inside that house,” says Arul, as he swipes through the pictures of rescued people on his phone. Learning first-aid Pointing to a huge first aid box attached to his seat, Arul says that he is also trained in first-aid. Often, when they head out for a rescue, the notice that the victim’s legs and hands are infested by maggots due to living in unhygienic conditions and with diabetes. The 34-year-old learned first-aid, so he could clean their wounds before taking them to shelter homes.

As he shares his story, we reach the place of rescue. Outside Perambur loco station, we see an old man lying in his own feces, and his feet were half eaten by worms and maggots. Arul gets down and quickly takes the mask, gloves and other necessary equipment out of the first-aid box and runs to the man. He talks softly to him, consoles him as he cleans the wounds. Within an hour, he convinces him to go to a home, and four hours later, he was admitted. Arul looks at us and says, “This is the best part of my day.”

Arul also introduced the Karunai Ullangal Trust mobile application on Google PlayStore in September. The app lets the public upload pictures of the abandoned people and assigns volunteers for the rescue.
It also has a database of all the rescued people so that you can help them find their family if you know someone. If you want to report/help a homeless person on the roadside, contact 9841776685