Subcontractor Joginder says he is yet to get money from the contractor to pay the workers.

CHENNAI: Days after Express reported how migrant labourers engaged in construction work at a site in Ayanambakkam have been left high and dry without their wages being paid, a few of them were given one-month salary. Many others, however, are yet to get paid. The developers, contractors, and sub-contractors are now engaged in a blame game, with none taking the responsibility for paying the money. 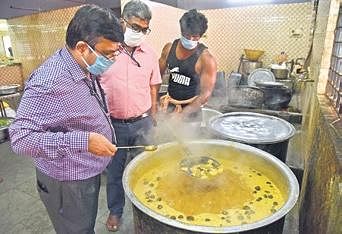 Thirty-three year old Bhagirathi, a carpenter from Chappra district in Bihar and a father of two, said he was paid the salary for the month of February and it was a huge relief. But many of his colleagues have been left in the lurch. Twenty-eight-year-old Krishnakumar from Chattrapur in Madhya Pradesh said his contractor Joginder did not pay him the salary for February and March.

“I had taken a loan of `60,000 to `65,000 for my marriage. Now these people call me often asking me to pay back the money. The officials here are only making promises. They are not releasing the cash. Even my parents and wife are worried. At least they could have made arrangement for us to go back home as no work is happening,” he rues.

Kumar says around 300 workers protested for two hours following which a police officer intervened and held talks with the supervisor who promised to that the issue will be sorted out within a week.“Now we are hoping that we are paid the salary after a week. Most of our families are in distress,” says Kumar.

Now we are on Telegram too. Follow us for updates
TAGS
migrant labourers chennai lockdown