Big dip in fresh Covid cases in Chennai after June 16

After a gap of nearly two months, fresh cases in Chennai have dipped below the 1,000- mark and touched 984 on Friday.

CHENNAI: After a gap of nearly two months, fresh cases in Chennai have dipped below the 1,000- mark and touched 984 on Friday. Positivity rate at the Chennai Corporation’s fever camps have also come down from 31 per cent in July first week to 18 per cent this month. Since June 3, the city has been recording over 1,000 cases every day except on June 16. 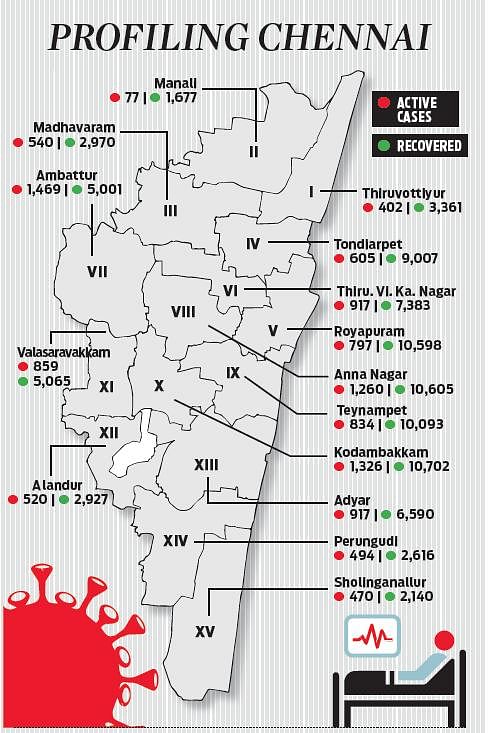 As many as 11,595 tests were done in the city on Thursday. Experts attribute the success in Chennai to fever camps. “They are the game changer,” says city corporation commissioner G Prakash. But, while the capital city’s share in fresh cases came down to 16.7 per cent on Friday, other districts rose to fill that gap. The State recorded a substantial 5,880 fresh cases, taking the tally to 2,85,024.

The number of deaths hit a new high on Friday, at 119. The Statewide toll now stands at 4,690. Tiruvallur recorded 388 cases, while Chengalpattu and Kancheepuram registered 319 and 166 cases respectively. The State tested 67,352 samples and 65,189 people on Friday. On a positive note, the number of people discharged on the day stood at 6,488, which was higher than the fresh cases. The number of people who have recovered so far rose to 2,27,575.

Now we are on Telegram too. Follow us for updates
TAGS
Chennai COVID 19