Amish Tripathi’s latest to hit the bookshelves, Legend of Suheldev, will tell you tales of valour and grit of a lesser-known son of the soil

CHENNAI: Shiva, Ram, Sita or Ravana — author Amish Tripathi’s interpretation of iconic characters have always left me in awe, accompanied by new-found respect for them. These mythological icons have, of course, carved a fan following in their own spaces, since his first book. But, in his recent launch, Legend of Suheldev, Amish introduces us to a lesser-known hero, who was instrumental in uniting the different dynasties and kingdoms of India into one band of warriors. While our History textbooks have taken us through the conquests of Ghazni, how many of us, perhaps even many history buffs, have heard of Suheldev? “I think he’s the most consequential hero in Indian history that we haven’t had before. He defeated the invading Turkic army, who were the military superpowers of the world from the 11th to the 17th century. He inflicted such a devastating defeat on the Ghaznavid Turks that no Turkic army came back to India for nearly 150-160 years. Isn’t he a hero that we should know about? It’s unfortunate that our establishment historians have ignored so many heroes like King Suheldev,” points out Amish.
With Legend of Suheldev, Amish takes on a new journey with his team at Immortal Writers’ Centre. He hopes to continue to attempt to bring to light the stories of these great heroes and heroines who fought for India.

We are getting to read a book by you within a year of Raavan: Enemy of Aryavarta. Has the lockdown aided in the book’s early release?
Yes, I have more time to write. Being a workaholic, I do very little besides work. What aided getting Legend of Suheldev out within just a year of Raavan: Enemy of Aryavarta was actually the Immortal Writers’ Centre. Like they say, more hands make light work. So collaborative work is what has helped. Right now, we have five projects running simultaneously in the Writers’ Centre. You will see more books coming out regularly from my house, but my core books like the Ram Chandra Series, Mahabharat, etc; will only be written by me. Presently I’m working on the fourth book of the Ram Chandra series. 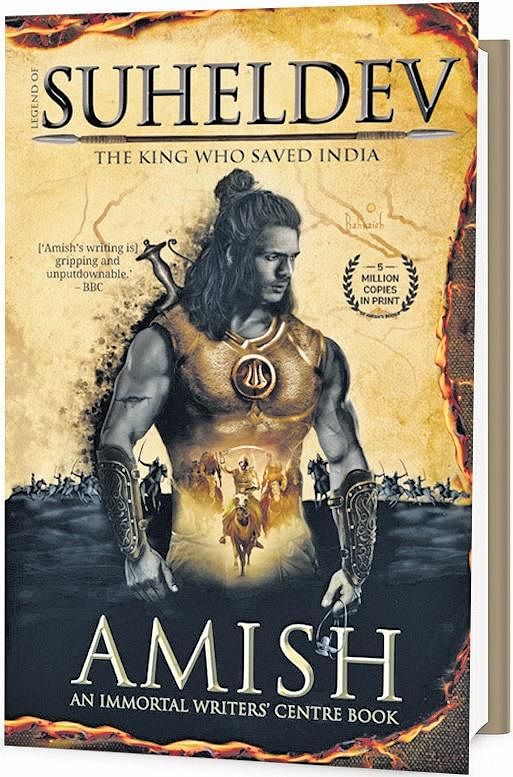 Could you tell us more about this new team and the process of stories being evolved into a book?
The Legend of Suheldev has been written by me and the Immortal Writers’ Centre. My biggest fear is that I will die before I finish all my story ideas, because I already have too many story ideas. The idea for the Immortal Writers’ Centre came from my team. It is a process that has been tried abroad but not in India. We’ve hired four published writers. I write a story summary that could be may be 5,000-10,000 words, consisting of the main characters, etc. Then, either a team or an individual expands it into the first draft of the manuscript, which would be 60,000-65,000 words, followed by me working on and finalising the second manuscript. That’s how the process works. This allows me to expand my capacity. I can now get many more books out there since I get to work on multiple books simultaneously. This will ensure that I publish all my story ideas before I die.

Your books often follow a common thread — of communal amity, seeking abolition of caste system. While we have had great leaders who have fought to eliminate them, do you believe that narrating them through characters will make an impact? Because Suheldev, years after his death, has been hailed as a Hindu leader who defeated a Muslim; contrary to what he would have loved to be known as.
The issue is a little more complex. There’s no denying that the Turks were Muslims. Just as the British invaders or the Portuguese invaders were Christians. That is a historical fact. And that the Turks did destroy many Hindu temples, burnt Hindu and Buddhist universities to the ground, massacred millions of people, is also a historical fact. But I think what we need to realise is that while those invaders were Muslims, they were Turkic Muslims; they were foreigners; they were not Indian Muslims. It is important to understand that differentiation not only because it is true, but also for the sake of national integration today.

When we think of kings, soldiers, freedom fighters, often it is the ‘north Indians’ who come under the spotlight. The south Indian leaders’ valour is almost never discussed. You have discussed some of the valour briefly in your book. Can readers expect you to take us on a journey of a south Indian leader?
I think I should calibrate your question a bit because you say that it’s only north Indians who come under the spotlight. I think it’s even more specific. It’s only the region of Delhi that largely comes into the spotlight, unless it’s an empire that is too big to be ignored like the Mauryas or the Guptas. We have an excessive Delhi centricity in our establishment history. And this needs to be set right. So, the further you go away from Delhi, like to Central or Eastern UP, Bihar, Bengal, MP, South Rajasthan, Gujarat, Sindh, the more ignored these regions are. And of course, this affects Indian leaders from the south, as well. It affects Marathas, for example, who are Indian leaders from the west.

So I do intend to write many stories on Indian leaders from the south too. One on Rajendra Chola, for example, whose empire was bigger than that of Akbar’s and his story has been reduced to just two lines in our national establishment history books. There are great heroes like Marthanda Varma who defeated the Dutch in the Battle of Colachel, or Abbakka Rani from Karnataka who defeated the Portuguese, a heroine that we should know of. So many of these figures have been ignored, and our history needs to have less of a Delhi bias and more of an all-India approach. I’m not denying Delhi’s importance; but it is not the only region in India.

There are also several references of homosexuality in the book, but there has been no mention of how Indian kings/soldiers reacted to it. Could you throw some light on how homosexuality was viewed in ancient times?
Homosexuality was actually quite common among the Turks. It has been recorded in the contemporary texts of that time that Mahmud of Ghazni was a homosexual. Alauddin Khilji was one as well. Then there are some historical texts describing Babur’s attraction toward young men. And as far as Indians of that era are concerned, they were quite liberal actually. The members of LGBT community weren’t looked at differently or as serious criminals. If the Indians hated the Turks, it had nothing to do with many of them being homosexuals. They hated the Turkic invaders because of the death and destruction they carried in India.

Read the full interview on www.newindianexpress.com