Over 1,00,000 migrants sent back home from Chennai so far

CHENNAI: While the stories about migrant workers walking back to their homes, sleeping outside railway stations and bus stops, continue to pour in, the Chennai Corporation on the other hand has sent more than 1 lakh guest workers back home.

According to official records, the civic body in collaboration with Greater Chennai Police and Railways, has facilitated travel of 1,10,134 guest workers to different states including Bihar, Uttar Pradesh, Odisha and Assam among others. There are about 3,000 migrant workers in Corporation relief centers in the city, waiting to go back home.

"When we began intensifying the operations to send these workers back home, the word spread very quickly. Migrant workers from in and around Chennai, neighboring districts and even neighboring states walked all the way to the city, seeking to return to their states," said Meghanath Reddy, Deputy Commissioner (Revenue &Finance).

So far, 79 trains have been operated from Chennai to 17 different states. Among this, most number of trains were operated to Bihar (22) followed by Uttar Pradesh (14), Jharkhand (9) and six trains each to Assam, Odisha and West Bengal.

"All of these trains were operated between May 9 and June 7. Each of the train costed anywhere between Rs 11 and 20 lakh. We have spent close to Rs 10 crore on transporting them. We provide them with water and food for the complete journey," said Meghanath.

Another Corporation official added that they do not have exact number of the remaining migrant workers. "A lot of them are now reluctant to go back since the economy has kick started and they got back their jobs.We are expecting only about 25 per cent of the migrant workers wanting to go home are remaining now. There is no official count since some of them have not registered at all, and those who registered, have registered multiple times. But we are positive that we can send the rest of them very soon."

The civic body faced numerous challenges while co-ordinating the whole exercise. "70-80 per cent were North Indians. So, in the beginning we used to give 15 kg rice, 1 kg dal and 1 litre oil per four people. Since, they don't consume a lot of rice, they could not eat properly. We then spoke to officials and changed it to 5 kg atta, 5 kg rice, 1 ltr oil, 1 kg sugar, 2 kgs of different varieties of dal and other essential spices," said Hari Krishnan, government appointed volunteer co-ordinator for GCC.

Other challenges include convincing those in the relief centers to stay back till a train is arranged, rescuing migrant workers from roads and giving them the confidence that we will send them back home. "As soon as the government announced that travel can begin, everyone grew restless. Some of them left and started walking back home. Most challenging part was to convince them to stay, because if they don't more number of people will leave," said Hari.

Another issue is that the Corporation sends a text message of the confirmed ticket to the migrant workers. Instead of just them coming, they get their acquaintances too requesting to go back home. So, instead of 500 people who have confirmed train tickets, 5,000 would be waiting at the station. However, currently according to Corporation officials, comparatively very few migrant workers are left and efforts are on to send them back home. 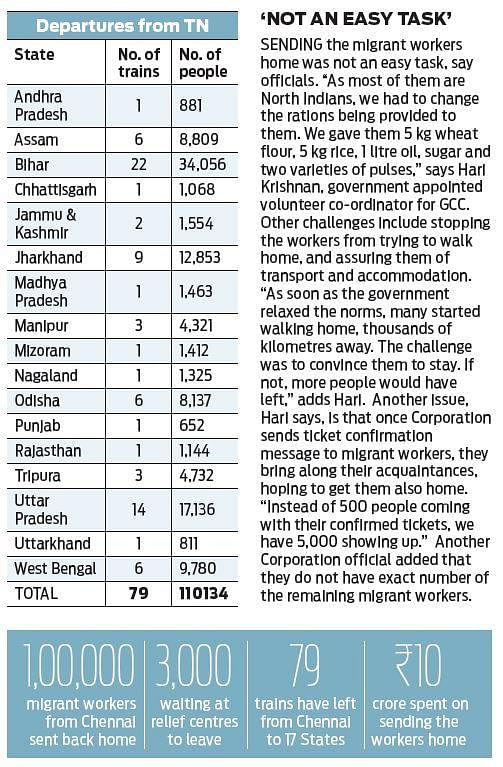 Now we are on Telegram too. Follow us for updates
TAGS
Migrant labourers chennai