COVID-19 positivity rate in Chennai stands at 5.4 per cent

According to data released by the city corporation on Sunday, in the last seven days Chennai has recorded a negative case growth of 3.7 per cent. 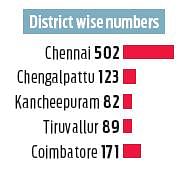 Fourteen out of the 15 Corporation zones have a negative case growth while Zone 12 - Alandur - alone has a positive case growth rate of 1.4 per cent. Corporation officials said that there has been a rise in cases locally near the market areas and it will be contained.

Five Corporation zones - Tondiarpet, Royapuram, Teynampet, Kodambakkam and Sholinganallur all have
an active caseload of one per cent, while Chennai has active cases slightly below three per cent.

The State reported 1,819 COVID-19 cases and 12 deaths, taking the tally to 7,58,191 and toll to 11,478 on Sunday. A private lab,  KG Multi Specialty Hospital and Research Centre, Molecular Diagnostics, Thanjavur has been approved for COVID-19 testing.

Health Secretary J Radhakrishnan inspected the Government Hospital in Tiruvallur. The district has 1,766 beds in government and private hospitals for COVID treatment

Now we are on Telegram too. Follow us for updates
TAGS
COVID19 Coronavirus CHennai COVID cases