“It’s the 7.5 per cent reservation for the government school students which has helped me move closer to getting a seat in Madras Medical College.

CHENNAI: “It’s the 7.5 per cent reservation for the government school students which has helped me move closer to getting a seat in Madras Medical College. It has been my dream and I thank the government for this opportunity,” says S Dhivyadharshini from Chennai, who secured third rank in the merit list released by Health Minister C Vijayabaskar, for 7.5 per cent reservation for government school students, on Monday.

A student of Government Higher Secondary School, Arumbakkam, Dhivyadharshini passed Class 12 in 2018. Her father, B Shivakumar, is running a catering service and mother K Tamilselvi is a Corporation school teacher. “I want to be a gynaecologist and I aspire to help students like me. I sailed through because of my determination,” she adds. 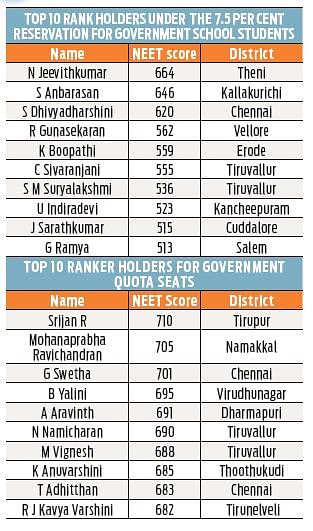 ‘This reservation is a timely help for students’
Cuddalore: Sarathkumar J, son of a farmer in Cuddalore district secured 515 marks in the National Eligibility cum Entrance Test (NEET). He is one among the top ten students who made it to the Tamil Nadu NEET merit list released on Monday. Thestudents will be given medical seats as per 7.5 percent reservation for government school students. Sarathkumar a native of Veppur in Cuddalore district completed his education from Nallur Model School in 2019. He  said, “ I could not pass NEET in the first attempt. This was my second attempt and has been possible only due to timely reservation announced by the State government.”

Son of daily wage labourers  secures fifth rank
Chandhini R @ Erode: A tiny village named Kundamallanayakanur in Kanjikovil panchayat gets its first ‘doctor-to-be’ after K Boopathy secured fifth place in the rank list for admissions to undergraduate medical courses under 7.5 per cent horizontal reservation for government school students who have cleared NEET. K Boopathy, a student of Kavindapadi Boys Higher Secondary School got 559 marks out of 580 in the NEET this year. He hails from a poor family -- father Kumar and mother Parvathy -- are daily wage labourers who earn less than ‘300 per day.Speaking to TNIE he said, “One thing this achievement taught me was -- It doesn’t matter where you are from, what matters is where you want to go.” After finishing school in 2019, Boopathy enrolled in the free NEET coaching classes offered by the government and prepared for 40 days.

Now we are on Telegram too. Follow us for updates
TAGS
NEET-UG Chennai girl